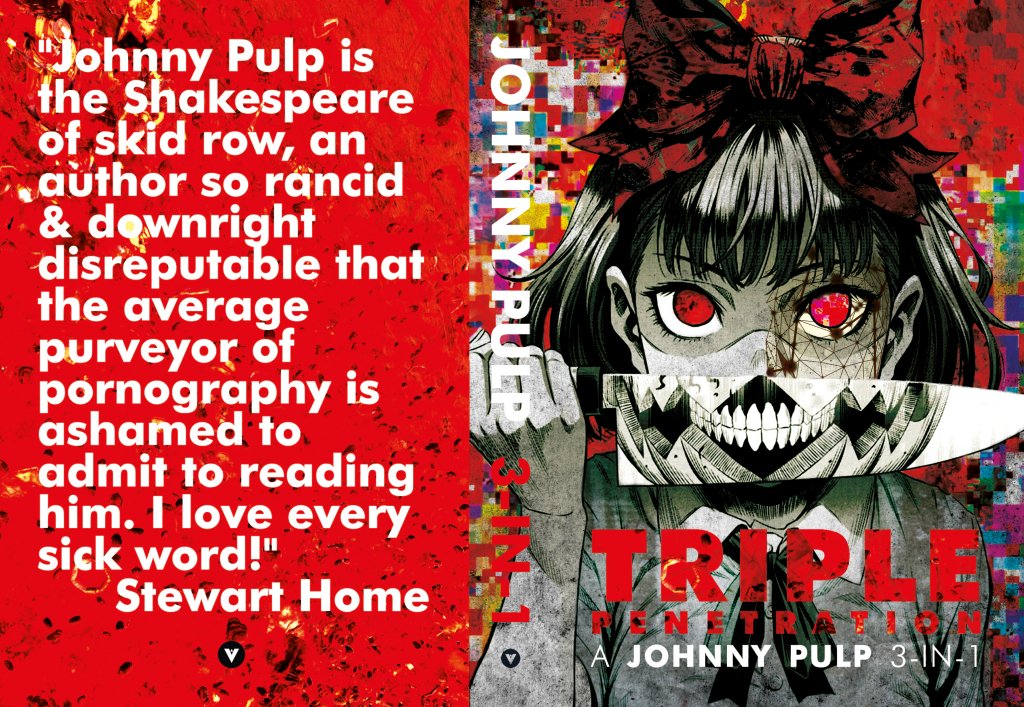 “Johnny Pulp is the Shakespeare of skid row, an author so rancid and downright disreputable that the average purveyor of pornography is ashamed to admit to reading him. I love every sick word!” (Stewart Home)

The work contained in Triple Penetration was originally published in 3 separate volumes by Neo-Attack! in 2005:

3. A TOUCH OF DIRTY MANGA 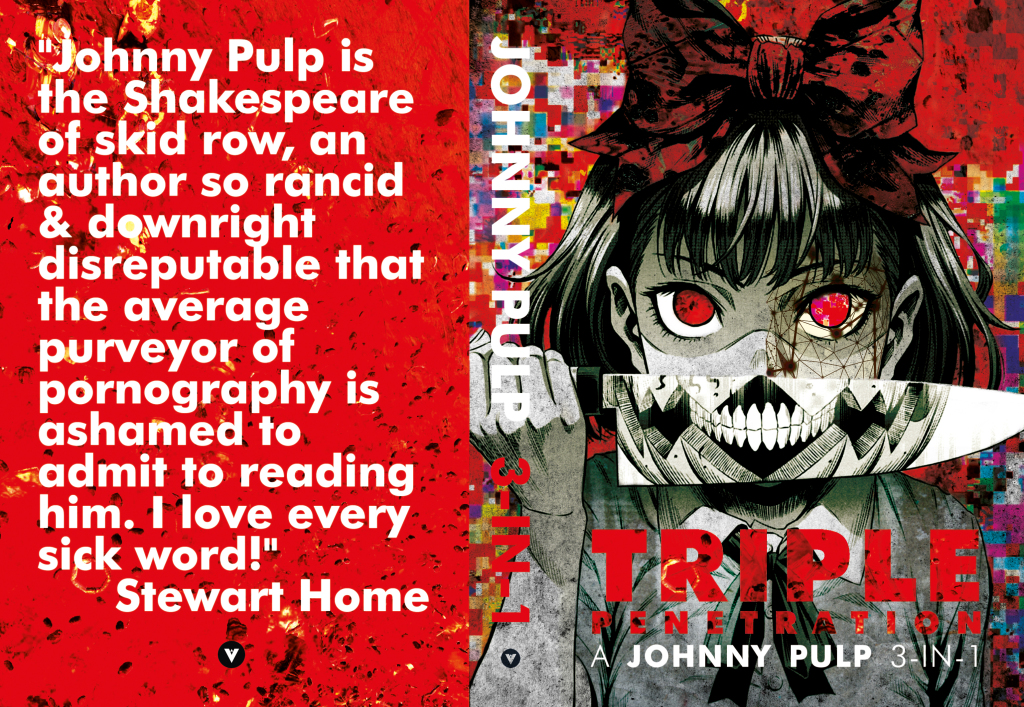 Neo-Attack! was an obscure tribute to Steven Wells’s Attack! Books, founded in London in 1999. Occupying “the dangerous borderland of grotesque comedy, sexual liberation and vertiginous horror,” Attack! Books was built on the premise that “contemporary Literature (as index of middle-class culture) could be short-circuited with contemporary tabloid writing (as index of working-class culture) to produce something which would upset all of the social conventions surrounding the two.” Self-consciously adopting the stance of a “pop-cultural avant-garde” in the tradition of Swift and Sade, Dada and Burroughs, Attack! Books aimed at subverting what Richard Marshall, writing in 3:AM Magazine, called “Rupert Murdoch’s efficient hegemonic tabloid machine,” by mimicking the “tabloid gothic style in a gloriously brutalising, cranked-up extreme inversion” infused with “cartoon violence and sex” in order to affect a “splenetic satire” and “sustained scorn” of “radical dissenting” intent. According to Marshall, Attack! Books constituted a two-pronged cultural offensive, aimed both at the “boring self-regarding prose” of the British literary Establishment – which had sought to monopolise the discourse on contemporary literary culture “to the exclusion of anything else and the exclusion of anyone else” and in whom it sought to provoke “anguish and disgust” – and at the “right-wing tabloid agenda” which, by “mastering the prurient moment” had usurped the expression of a popular consciousness, “relating the lurid details of the murder or rape case in order to put across their wobbly moralism that murder and rape are terrible and not entertaining.” Consequently, it was the aim of Attack! Books to “tap into a popularist, inclusive and democratic context that rudely dissents from the powers that be…” an “insolent laughter,” as Marshall says, “of the angry and the powerless…”

New additions to the franchise eventually made its way before the public under the title Dirty Manga Bastards , by the pseudonymous “Johnny Pulp” – one of eleven books authored by him (including Cancer Boy; Postcards of the Hanging; The Millennium GM Killer Mutant Lesbian Baby Plague in a binge of attempted institutional sabotage and printed simultaneously under Randolph Carter’s Neo-Attack imprint in 2005. The new series – part continuity, part homage to what Marshall described in his obituary to Wells (who died of cancer in 2009) as “a publishing venture that is still… one of the most daring and truly radical of its kind” – was a bizarro mash-up of post-apocalyptic noir, pulp action comics, cyberpunk, transgender porn and continental philosophy (Johnny Pulp’s “filthied-up” review of Stewart Home’s Defiant Pose – comprising chapter 16-17 of the book: “Madame Atamos Sheds Her Skin” – is punctuated with random appearances by “the Jean Paul Sartre Mayhem Monster,” “the Albert Camus Car Crash Killer,” “the Roland Barthes Blitzkrieg Beast,” “the manically depressed Louis Althusser Strangling Raptor Creature,” “the incredibly complex and convoluting Jacques Lacan Ringmaster Killer Psycho Hysteric,” and “the Nietzschean House Of Whipcord Foucault Fuck Machine”).

The Neo-Attack project, in common with its predecessor, only accedes to being “Literature” in ways similar to Home’s claim to being an “Artist” and “Writer” – which is only insofar, as Mark Williams says, that all three terms are thereby exposed as “public demonstrations of the inevitability of reproducing one’s own alienation under capital and therefore show forth the contradictions which affect us all.” Like Williams’s term “subliterature,” the labels Home’s work has been least inclined to reject are anti-novel and anti-art: the assault on reactionary culture and the “negation of present social conditions,” in Williams’s view, being “key to all his writing.” What all of these subliteratures share, however, is an additional scepticism towards the sort of liberational narratives lazily associated with historical avant-gardes, whose “socially-transformative aspirations” are boiled down to the sort of naïve soundbite “dialectics” of “opposition and transcendence” that can fill a column-inch of catalogue space in the latest Taschen Art Now. As Jack Sargean writes in his recent study of underground film: “The notion of an authentic moment realised in transgression would render such actions beholden truth” – for which reason neither Home, Wells nor Marshall “depict nor search” for any such “truth.” Instead, where they arrive is at “the Wittgensteinian place where there is nothing that can be said and all that is left is silence… No amount of irony can redeem it, and so it is redeemed!” (*Louis Armand,   3AM magazine 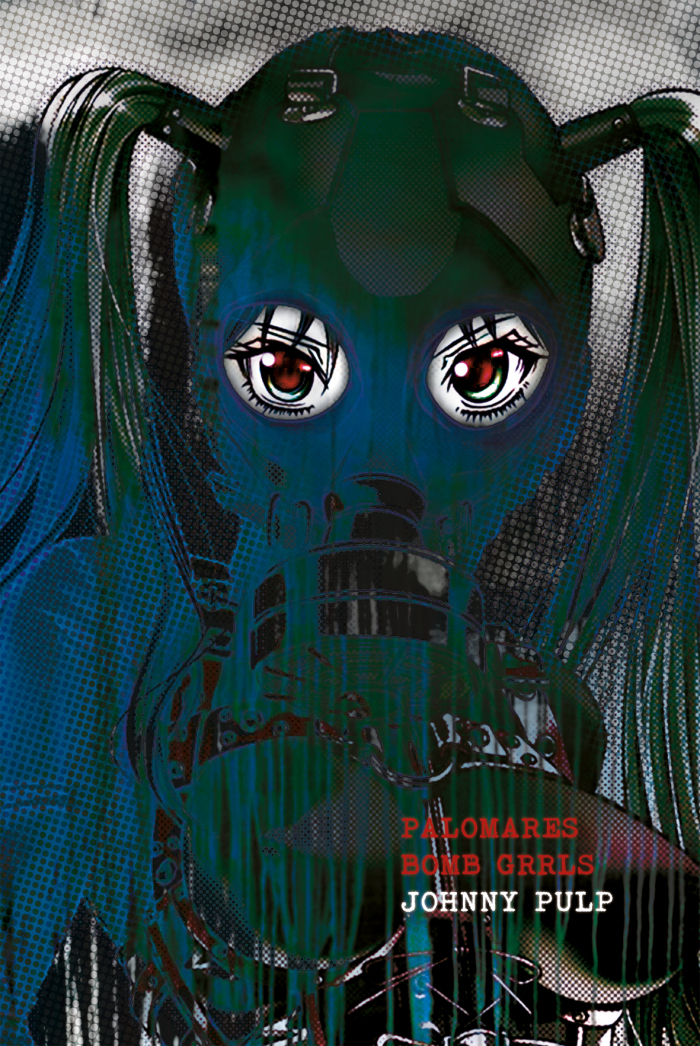