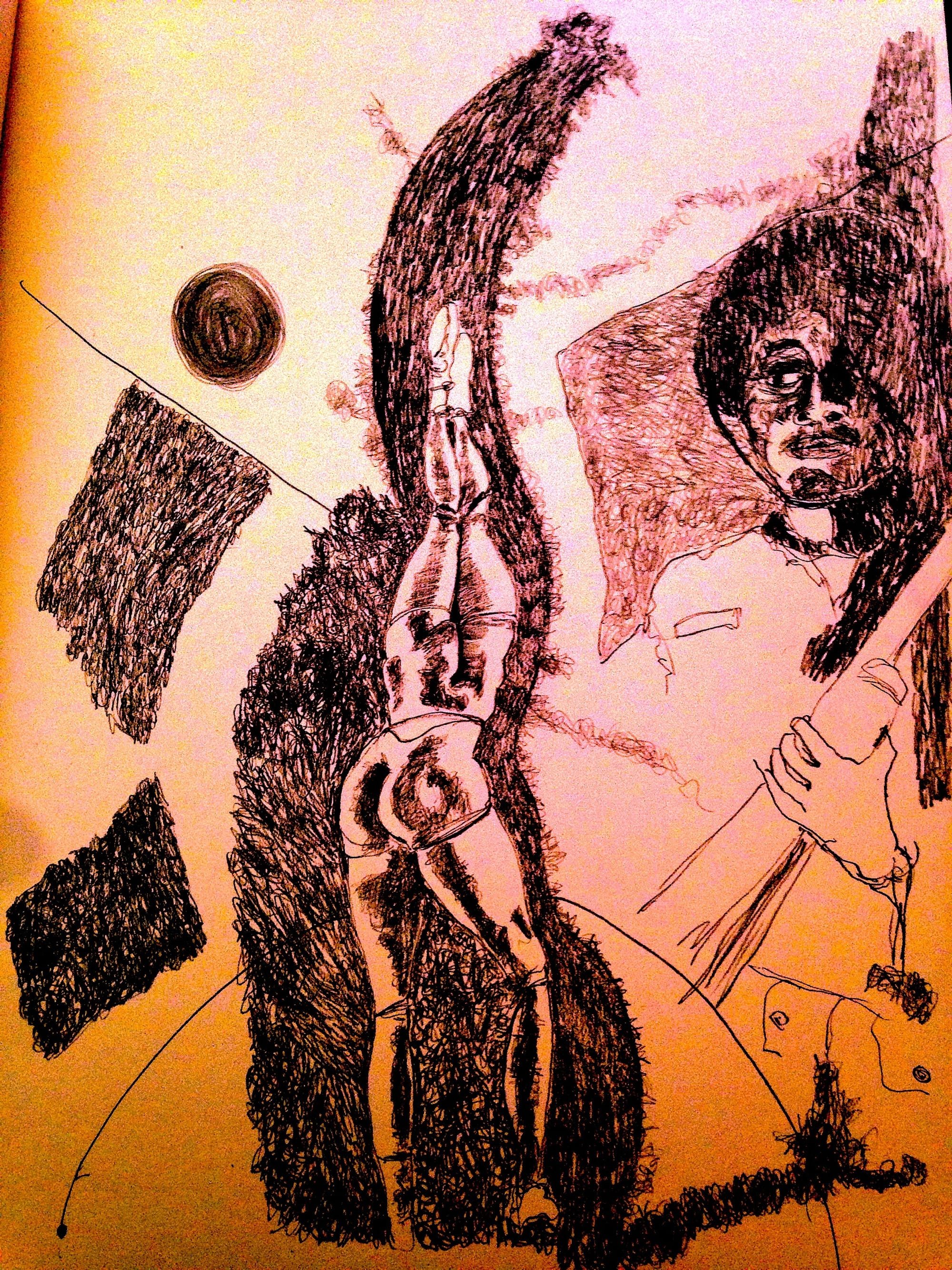 There’s no time . He’s got business with his purposes. By this time he’s already shown there’s a kind of darkness inside that allows him to do this. White grind house teeth. All that dark hole. The white house tolerates disreputable parts. Johnny’s interventions always seem to be the first time. Johnny keeps crawling into the dream house. Desire for violence creates more violence to fill the violent hole in his head.

Woe to the ones who behold the pale house. Looking the other way turns souls black. So knowing this, Johnny, we say, you can go out now. Our intuitive minds can leave. Walk away before we get what we wished for.

‘ When can I go?’ We’ve already been told we can go at any time we want. But as long as we’re dreaming in the hell house all we have is that mysterious whispered message. Was she telling us it shouldn’t be even be a question. We already know what she said.

‘My head killed me.’

Yet here we are at the beginning . We want to know what’s next. We want our explanations. So we look the other way. We look the other way. The essence is sucked out . The wind blows and the curtains prove fierce. There’s nothing but blackness behind all those shut doors. White of the teeth. The black gullet swallows. And there’s the white house. We cut straight back to the beginning of the scene. By showing us the same thing twice we know that the darkness we’re about to allow into our hearts is an absence. And what is the dream Johnny’s treated to? Napkin drawings. When there’s something nearby you start working things out. It might end up with a tattoo. Or a word inside a matchbox. It all seemed old school. There were a lot of times like this. Time like diptychs where we lose things. Little rooms can seem bigger. You can replicate different moods in actual environments. Some things become more interior than before. These times they end up only partially finished.

When everyone turns out to be just like you there’s nowhere to walk to. Johnny saw his time in flashes of ballpoint. He liked the way the shapes were. And the pure mood. People were getting shot now. And were getting a little bigger. It seemed to come from the nose. The world of raw matter. The nose is higher than a mouth. Some days people were just cobbled together. Some spirits are prosthetic. They should have been made in between. He was thinking about all those things. There was a potent meaning. Then there was no meaning at all. Sometimes there were exceptions. Next time he looked, everything was a rule. He couldn’t always figure out. Those days ended in mounds. But then again, he was at his most spiritual. He never came home early. There was an atmosphere of anxiety and distrust. All the houses were growing up without him. There can be beauty and sincere transparencies. But hellish memories too.

He kept a whole roll of telephone numbers. He was thinking maybe a theatrical event or something others might appreciate. His eyebrows were like emulsion. He had 55 seconds some nights. Sometimes three times in natural light and additional sound. You had to go continuously. This is all he dared. Wonderful childhood’s are all on the surface. We’re like beetles dreaming of heaven. Bugs don’t have souls. They just go south. Everything goes south in your mouth. He can’t recall a chrome optimism. That came some time earlier. His was facing the other way, getting updated.

Everything was unlimited in smallness with a logic frailer than flowers. Now I know why people scream. The little pattings on the wood were relentless. In perfect stillness Johnny would feel absolute degrading coldness on his back. The intelligent thing to do would be science. He was rocking a little now because the noise was fading. But it wasn’t leaving him. It had found him and was trying to find a way. The door moved against its own hinges. There were sticky sounds and a little mad laugh. The laugh past them around the house. It was like a paste or liquid. It was a smear. Its deranged ingrediants were in every possible place in some concentration or other. Even though everything was unlimitedly small and the mix a thorough one, the mix wasn’t uniform. There were varying densities of concentration. And varying intensities in different places. Everything in the laughter flowed together and occupied the same volume of space. Yet it wasn’t a matter of dissolving. The individual parts of the mix retained their individuality. Their smallness is a way of talking about submergence and emergence. There is no limit on how submerged in the mix anything can be. Gold in my flesh is very low, thought Johnny. But the black is hardly submerged at all in here. Can the density change? He thought not. The laughter submerges but does not dissolve . At times it was reciprocating.

Is anything really happening? What if the door had shattered? Would a laughing maniac have walked in?

He was prone to fast, hidden, little curious glances. What secret terror lives down a gesture? Maybe impure terror can be purified at least approximately. Perhaps the laugh was no more nor less. Small is about distribution rather than size of particles. Did anything happen just then? 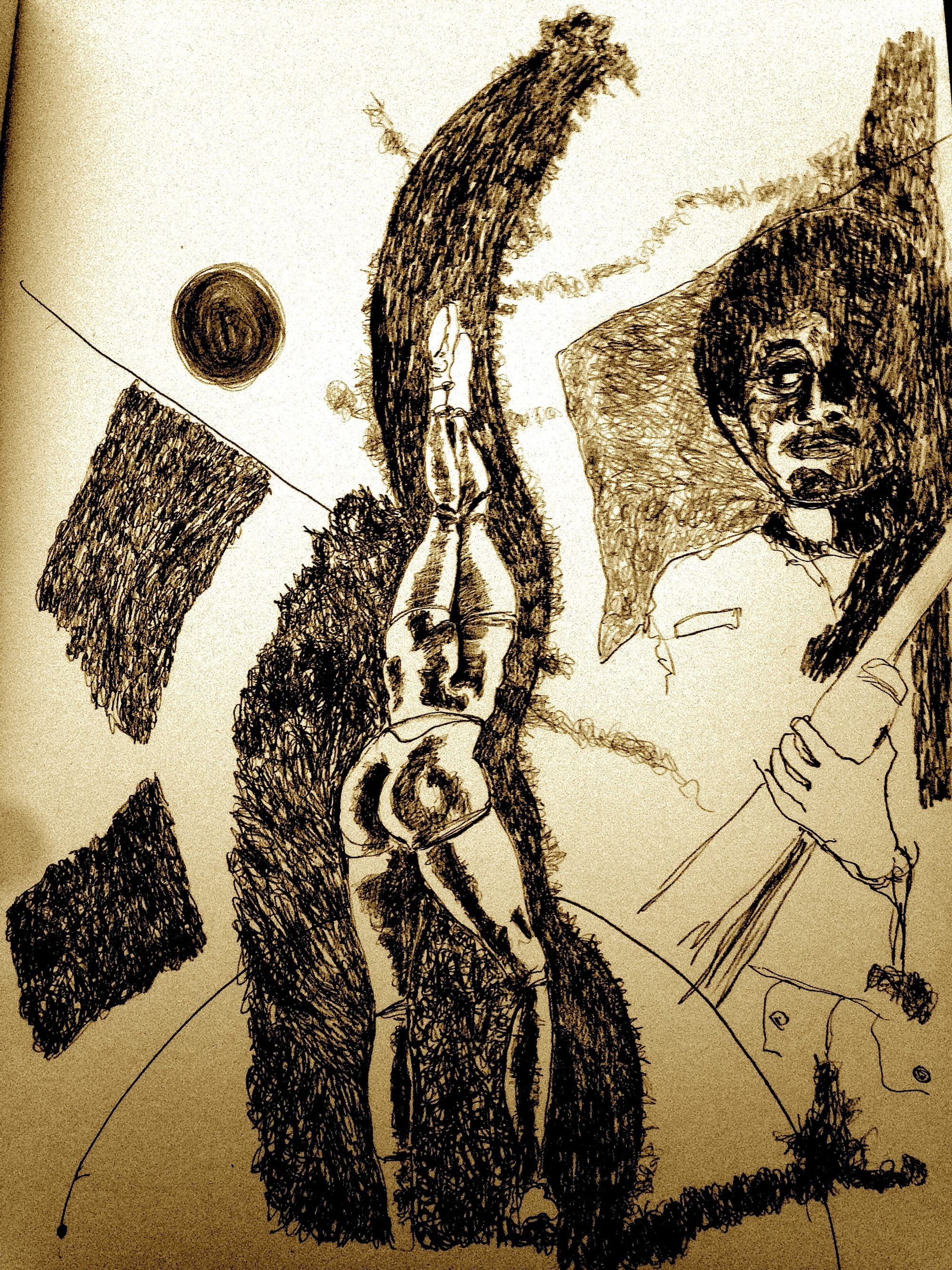