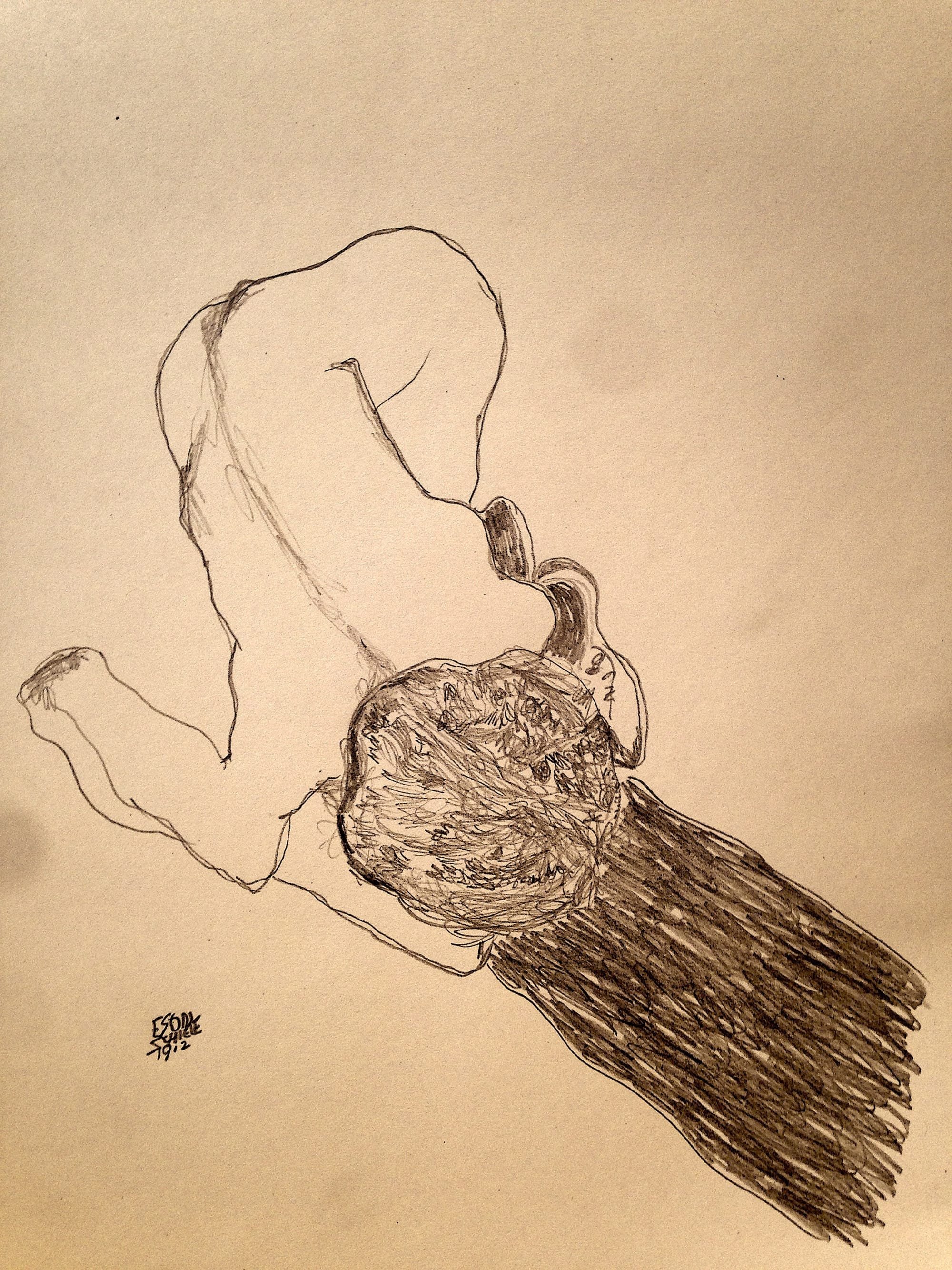 ‘What can you tell me that I don’t already sequence?’ Johnny was beaming his loftiest identity. The girls were thrilled and mainly decorative formulas. But they were beyond that low horizon too. They could emerge. They did from stimuli that were  incumbent and dedicated. A conspicuous feature of the courtyard was the foreground line.

‘Whatever you say, it’ll be a covering letter,’ smiled Danae. Yes, he grinned, I am so rich I need to give myself away, he thought. Leda from Berlin was going back there soon. She was full of lateral inversions. There were areas of brightness in even the darkest day. This conference was downcast and held a naked tendency towards hard impulses.

Improvisation is baroque. Realism and dream is Gothic. Deliberate barbarism is Expressionism. There is no battle of the sexes in me. There are no demon women. He didn’t declare this but rather watched it from his nerves. Danae drank her black coffee with vehemence and overstated excitement. Look at her mirrors. What do they hold? Dreams? Or nightmares? Johnny’s coffee was never light-hearted and modish. He had a tendency for fundamentals. His mortal sickness was less  joke, more torn bedsheet.

The lecture bent double. In Schiele we see a dreamy glimpse of the past. A reminder of how die andere Seite (the other side) began and what it was really about. He reestablishes our intuition link. Immediately after that the first real thing we see is the wind in the trees and the dead towns. He’s denying a modern art so he needs to feel the air and find out what’s driving it. Before anything can happen the zeitgeist blows in the mystery and this happens when his cardinal and nun caress. The cardinal dresses in crimson. Later we find out exactly why the wind blows in with this sex show. The cardinal  personifies the wind that stokes the fire of modern fear fuelled by modern art. The constant assault of public scares, political polarization and environmental catastrophism are the things in the air.

‘The virus. It flies around. The very soil iteself.. our bodies are poisoned… poisoned… Don’t go to the ploughed depths. Avoid churches and holy things…’ 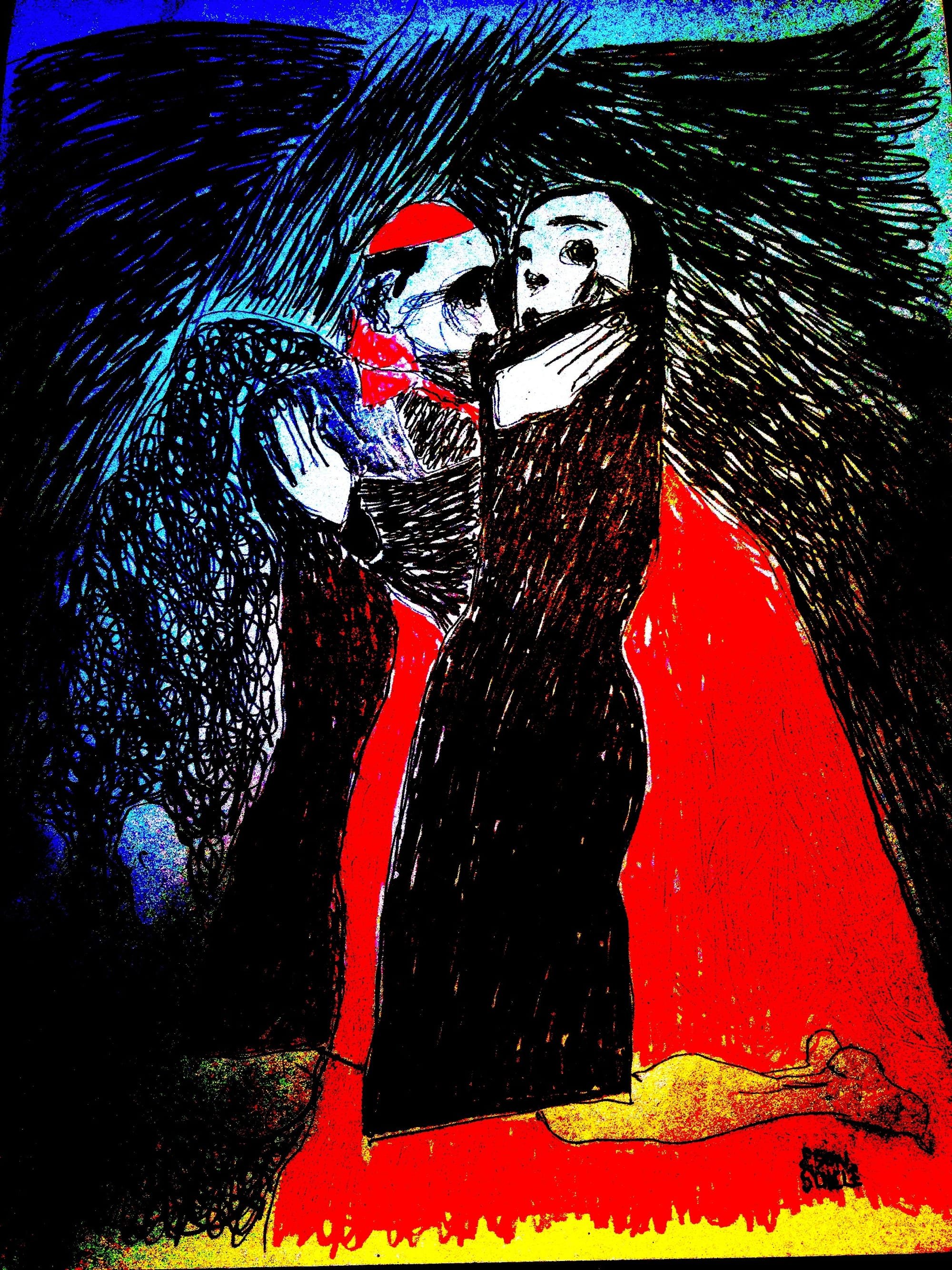 Why is the cardinal in red the voice of the zeitgeist? Why him? Who was he originally? Everything must serve the central idea. He is the eternal madman. He is a devil because he wears the red robes. He doesn’t wear them because he’s a devil. He’s a devil because he wears red robes. Because when he was painted that’s the kind of person he had to be to wear that devilish red all the time. What’s the idea behind the cardinal wearing these robes ? Art characters are usually very shallow so they’re easy to digest . They stress the one dimensional. Two if we’re lucky. But there is more going on with him. To illustrate this, the Cardinal wears red to show that he is deeper than most. He has read (red) others. He almost exclusively has intimate knowledge of his sexual victims’ dual nature, their yin and yang, their good and bad. All the others only know them as one or the other. She is looking out of the picture to us because she wonders what we know. She knows the cardinal, who is longing for her, is being reciprocated. She now knows enough to half volunteer. She wonders what we can know.

This confession session is another example of her enquiry. As a saint character she is a no good selfish drug dealing sexed up punk teenager. In any other picture she’d be nothing more than that. But the cardinal with his red robe has his ability to have read her (‘red’ her) as more than just a one dimensional ne’er do well. He will break her down into a blubbering child. Her sexuality only plays with fire and doesn’t face real darkness so she looks out of the picture. She will settle for less. That’s what her look is saying. She is caught up in her own black caress.

So we can see that the cardinal sometimes looks like a pimp because that’s the kind of person who would wear crimson and sexually assault young women in confessionals all the time. He's a reader who can see dimensionally. That ability serves the base level idea that this is an art made with sensibilities where the characters are more than 1 dimensional. They won’t be comfortable for the art crowds. The cardinal in red robes is the sign of the zeitgeist. He’s the character who has read what’s really going on behind the scenes. The people who can do this nowerdays are the conspiracy theorist types, hosting video podcasts about corporations and the government conspiring to crush the souls of the citizens using 5G power masts.

‘You can’t see it without opening.’

The cardinal in the red robes whispers to the girl in black whilst caressing her – ‘listen to me you might be saved.’ But he’s also selling her back her religious belief. As a nun she’s being told that his products are also hers. If she wants to have any hope of escaping her dire situation she’d better believe this.

The cardinal believes that religion is a way to dip the consciousness into colour and the more colour we can retain the more peace love and unity we can obtain to conquor fear. This is another reason why he is in the bold crimson and she is in black. Black is an absence of colour. But also a colour. With the cardinal there’s a sinister current. He’s a version of the new media and conspiracy theorists who claim to see beyond our surface level reality. He’s capitalizing on the fear in the air. He’s putting a price tag on false hope and false solutions. Garbage spray painted fake red.

One of the people buying into this false hope is the nude bending forward. Why? It makes perfect sense. The nude woman is married to nothing but sunshine, but she buries her head. And all she can see is how miserable she is. She’s got a half hidden head. She only sees half the picture. Her face is down in the ground. It is in the dark. She’s sees the negative but not the positive. What does she think will cure her misery and bring her happiness? Not the loving care of daylight in the upper air. She’s going for the dark eros that shuts out the light. Sex made with a downward torrent. False happiness based in sex negativity. She of course will buy into the fake red of the Cardinal. The crimson robes of false happiness take their rightful place next to the false happiness of her greased get quick rich sensuality.

As for the loving daylight persona, well, he remains married to her but can’t be seen. The greased sensuality is pain and sorrow. The provider of love and daylight is married to this negativity. But doesn’t want to be married to negativity. The love he tries to get is a face looking up. This face belongs to someone serving up that good balance that is both bitter and sweet. Everything that really happens is about companionship and love. They are the very essence. Art wants to put out love and positivity. But the crimson robes of the cardinal keeps art tied to the audience crying out for more childish desires. The nude with her face down is in a comatose sex act. She might come back thinking she’s a delicate, warm, loving child again. But she’s too negative, as is the art crowd. She’s just a powerful, crying baby forcefully demanding to be caressed by red cardinals and their false promises. She represses true love with darkness. Anything that happens with her is totally suspect and should be taken with a grain of salt. Her freedom to be like this will be repeated. Why this repetition? Well, she wasn’t in her right mind the first time we saw her but we’ve changed by the next time we look.

We love her backstory now. We care about her and we’re sorry we killed her off with our bad responses. And we know deep down on some level that we’re sorry we demanded the death of anyone. We had time to think about it. But Johnny is worried we’re being sold another false hope. He sees crimson robes flapping behind his eyes. He fears his own caresses. Remember when love was in the air? It was a thing of darkness and light. Johnny was trapped by a force outside. Oval forms of unvisualisable space composed him in an image of defenceless captivity. There is a rather narrow scale of psychological differentiation. If he is immersed he isn’t brash. Then again, he likes the Ovidian conceit of ‘deflowering with the eye alone.’ Eyes are voracious and greedy. This ocular aggression is hardly an innocent side dish. Visual gratification frees. Looking isn’t the same as the atmosphere inside it. When he looked he only saw her up to his own limit. Hardly emancipation of her then. Another case of the cardinal in red robes bringing false salvation. Legacies are worn as caricature. Johnny’s perversity was hallucinatory to that kind of reader. His head was often lilac and red and frozen pallors burst out. The world often seemed stretched or cramped. It made him seem isolated and exposed and Austrian. Rotherham as Vienna delighted his sense of unfolding. But it was little more than a generalized point of reference, like the phrase ‘nimble sylistic fingerwork.’ These days we should be interested in the language of the sick. It works like mime.

At funerals he thought this: ‘All is living,’ in order to balance things out. In conferences he liked coffee breaks because they led him into taboo areas. He was more often than not rigid and speechless. A consequent atmosphere of compulsion and obsession prevailed. All the eternal living people and their biscuits and cups were joyously unsupervised. He loved the tilted heads,  single hands and  fragile confrontations. 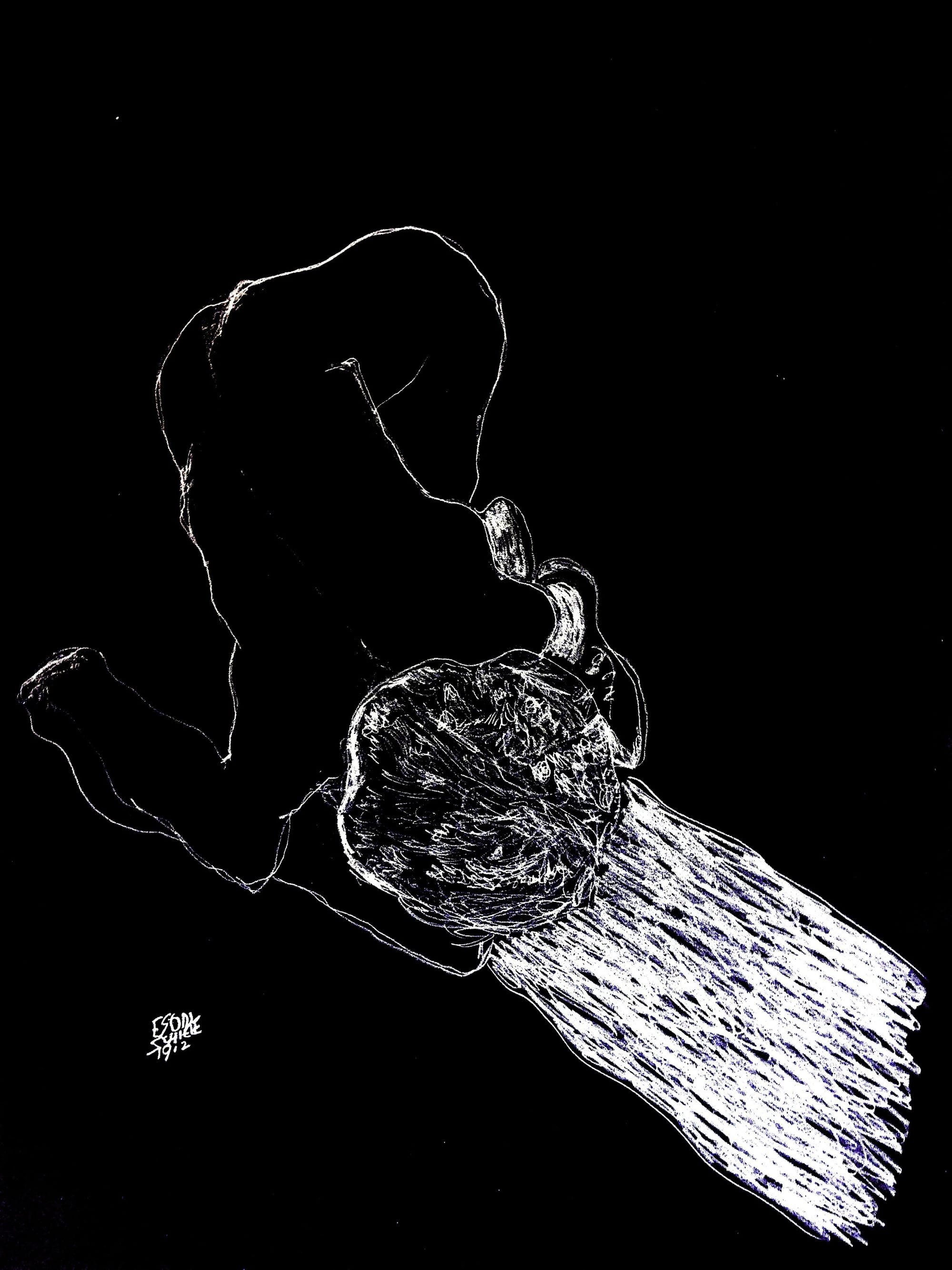