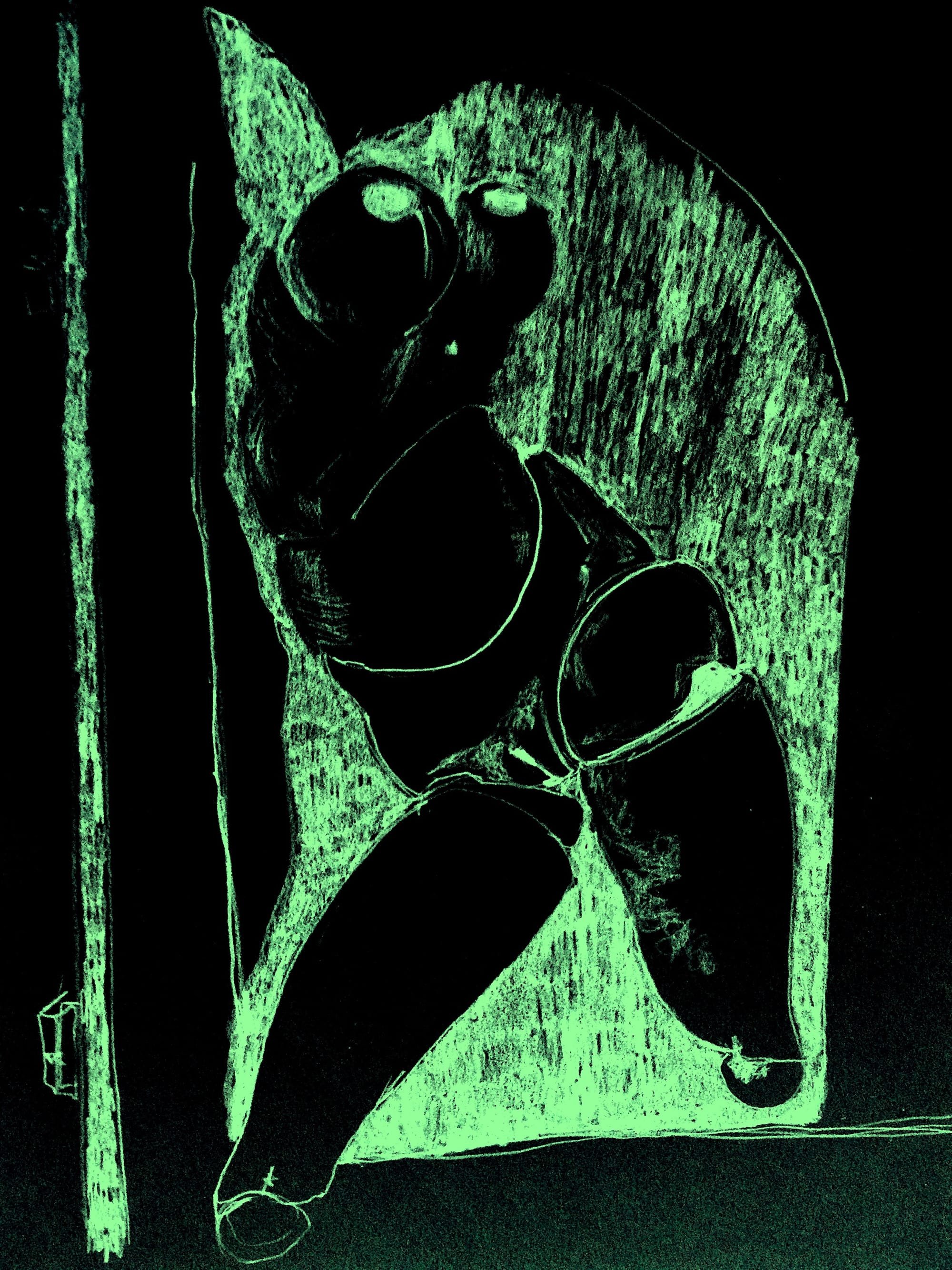 He slept with his dreams. She slept with hers. It wasn’t ideal. He saw wide landings and double doors, carved fruit and polished carnivores. Often lucid, his dreams were beyond crayon. There was a farther end sometimes. Other times a width rather than length. All the doors were closed. There was a second staircase probably to a servants attic. The dark woodwork was everywhere. Nothing broke the straightness of the hall except the doors and they were always closed. His dream room was blue. Blue figured paper above and below, a blue figured rug. The quilt was always wet and dark, almost red, as if hope had evaporated and isolation soiled. There was just the faintest hint of existence. The dimensions were chilly, wreathed and delicate. Everything stayed just a fraction too long. The room’s windows weren’t vital. It’s as if they want him to wake.

'I’m disturbing someone’ else’s nightmare being here,' he thought. 'Mindless fear is somewhere down the corridor, but not mine' he added.

Almost inaudible sobbing echoed from years away as if the dream was all wrong. Five minutes, and then he had the exciteable thought that someone would be furious with him. Through the monstrous windows he could see a veranda roof and a blank lawn. Whenever he visited the dream house it was always empty but someone was about to arrive. It’s a hideaway of sorts. It serves itself. He should leave before nightfall. Noone hears screams through these walls and the thick glass. He finds a way of opening them after years of twisting. It leaves his body the wrong way round. No one can hear him if he screams. When he screams he returns later. The sighing is intense like Jackson Browne, James Taylor, Carole King. He listened to Roy Orbison’s version of ‘Only the lonely know the way I feel tonight’ like it came inexplicably out of the grass. He was always suddenly off balance. He played the tough guy going yellow and soft. He was ebbing away. ‘I won’t if you wont’ he told himself, looking into a mirror that didn’t disagree. There was always a soft curve of hills in the distant small line that could have been a railway track. When dreams came the house didn’t belong to anywhere else in the world. Summer was a vase and its velvet flowers. The woods round about were terrifyingly high and he didn’t know if he had courage or just liked going too far.

The cold lawn didn’t have ants. The pathways did. The pond had tadpoles and frogs. The women were all rimless and thin. One wore wool and a garnet broach. When the frogs hibernated he took them out. He tried to make them curtsy. Then dance. They did neither. He took them to be dead. He pulled the roller over at least forty of them. The birds were starlings mostly and they went mad with what he'd left them. The sun was always going down, hiding the insane face of the house. Once a rabbit jumped strangely and scared him. In one room the ceiling was too high and overwhelmed the lamps. They couldn't spill enough light. The patterns were convoluted and narrow. There was an unpleasant fireplace with a cold fire. Self-assurance had drained into beauty and then gone over to somewhere else. He knew how the space of the house moved. That door, for instance, would lead to the hall through to the billiard room to find the dining room. But then it would reverse. And again, it would choose other rooms and occasionally they’d be entirely inside-rooms. No windows, no access to outdoors at all, like civilisation.

If you try and leave a dream like this it will kill you eventually. They just don’t like to let anyone go. They insist that you take an interest. They want you to wonder what is going to happen. It was a situation without preparation. Yet he was honed and receptive to its sickness. He thought the dream spaces were as real as non-dream spaces. He didn’t think of them as hallucinations. The dream space is like the mirror space, he’d say. It’s real. The mirror can sometimes fool us – but so can things in the non-dream world. Psychedelic space is real too. It’s just not non-psychedelic space. VR space is real too, again, its just not non-VR space. Real is a term with leases. Its harder to burn down a dream house. He was whipped by Reegan his father for killing the frogs. But that wasn’t a scandal. Nor a dream. It was always hard to get onto the right hand side of the past.

She on the other hand didn’t like to put a name to what doesn’t have one. Her dreams weren’t at all sad. She had a sense of chambering and wantonness infused by lust. If it was a vanity it was also just a version. There are multiple turnings in the process. Conversion wasn’t about scenes of weakness. Rather, it was always a matter of learning again. She wasn’t static, but a shifting dispensation. She could see a human in the term child and soldier each. From hour to hour she was a long string of pearls. There was nothing to unmask. There really was more than just one business identity and name. Women were unfolding better. There was always a riff on a beat and then further hiccups. Eventually there might be the need of a chorus for all the identities gathered or released. There’s a split between somebody and who she is. If she was exposing herself it wasn’t elsewhere in conversation nor dream. It was a way of saying something more than just shifting grammar. If there was beauty here it was one that didn’t like to hang around. Permanence and change were just questions. She needed to reject whatever resolved the situations as they arose. Her sexual ecstacy, spiritual surrender and moral determination were echoes. Chains of events that broke were not decay. 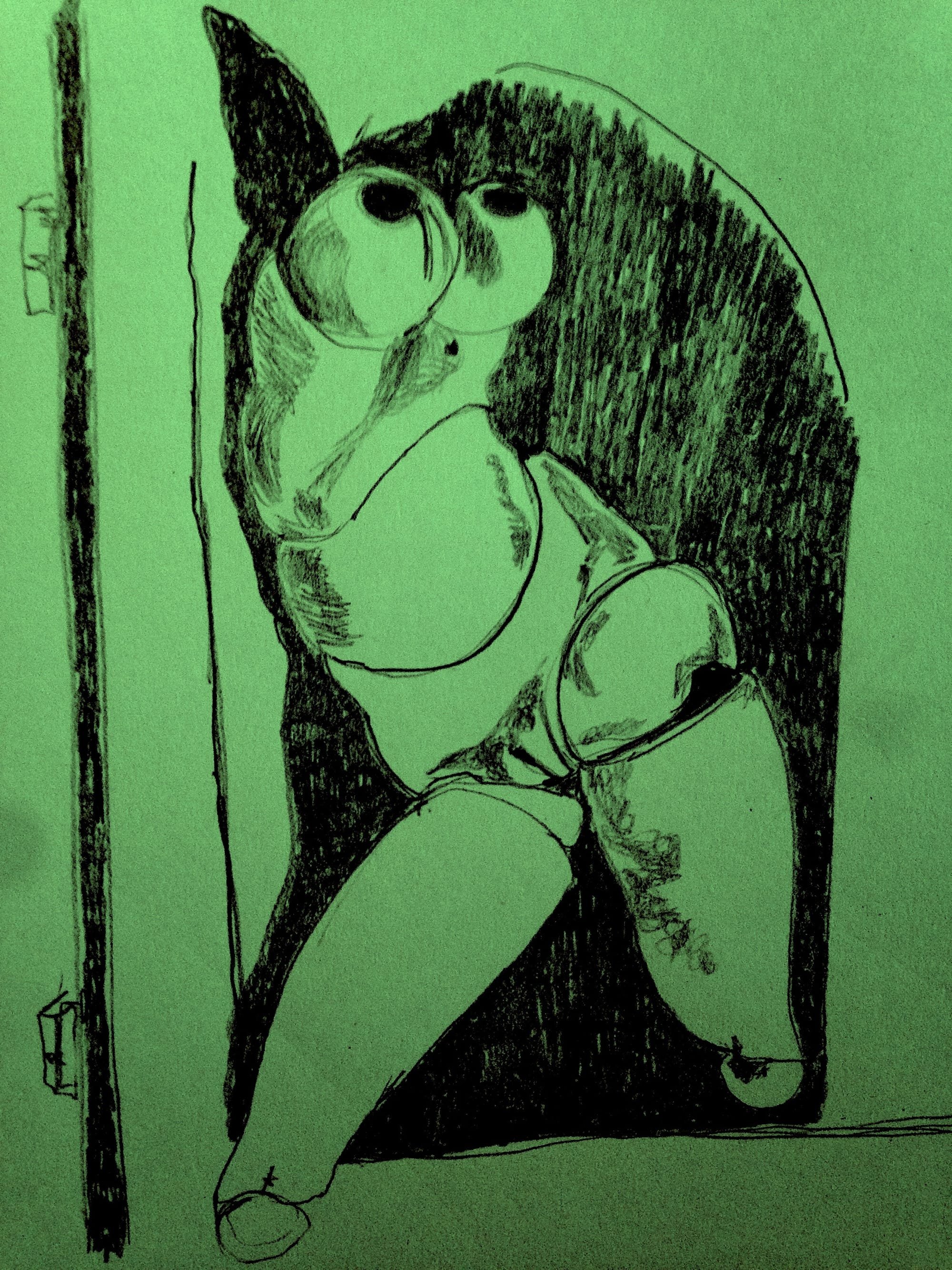 She rose each morning to Bill Blake’s ‘ To see a world in a grain of sand/ And a heaven in a wild flower/ Hold infinity in the palm of your hand/ and eternity in an hour.’ The tiny universe was about being ready. She looked back on what was forgotten. Gestures of intensification clipped away. More crimes take place at a certain temperature than any other. No one knows the actual temperature. It puzzled her how she could know this. What was ominous was only a kind of sinking feeling. She cuts a romantic figure. On her bicycle she’s like twilight on a steed. It’s a figure making deals against rough beasts. In the final end what had seemed like a beginning ended as an accusation. She made him into the dark ending. Her sweetheart was never something certain. Now he wasn’t even ideal. She’d gaze out of her window knowing the details were always changing. Her sweetness was coming late to history. Her power was a moment held over from repentance and uncertainty. Every day was another one condemned and a fresh one holding its own surrender between dazzling teeth. Everything has its limits, but then, so do limits. Unlike Johnny, she recognized how cut off from his past he was. And how her own appetites had exorbitant irascibility. She saw him ambiguously. And as illegible. And composed loosely. And at some moment that finally came. When he moved she saw just regretful futility in gestures that were too late.

In the dream Johnny often wondered why the house was so sad a house. Why didn’t he leave? Someone crawled through the window and stole things in the night. In a house like this, with all the doors tight shut, you’d hardly be able to steal anywhere else. But what went missing really? Was anything irreplaceable? Things are always capable of being used up. Why else would we have legs? But really, who would dare sneak around this house at night? The house watches every move. Sometimes when people die it seems wasteful. But if they weren’t happy that’s not exactly right is it? People don’t always do what they want. Some will answer questions about themselves even before. And with a little push there’s often more that could be. He remembered – but only in the dream - reading about a character with badly shaped hands. And he was intrigued by seven red lanterns hanging far up in the ceiling that looked as if they’d rather be longer.

‘Maybe I should think of them,’ he thought. But he knew he felt just a little bit nervous.

But the lanterns were too brief, as if they were far away toward morning. Whenever he smoked a joint something reached him that was incoherent but certain. All the rooms of the house from the ground floor up to the attics are instantly and simultaneously visible in manual form.

'Our lives are machines,' Johnny intoned. His little pauses were actually hesitations.

Each move we make are peculiar details. They determine our pets, furniture, literary quotes, curtains, clothes, food, friends, games, emotions, flowers and music. There’s a room no one ever gets to inhabit. It’s where the machine instructs itself to stop. Information without meaning can’t instruct. This isn’t poignant. It’s a baroque redundancy. He trailed his own life as a diagram disguised as a building in a dream concealing his own algorithm. His solitary looping was an inexhaustible anxiety. ‘I’m a deferred number or Turing tape,’ he grinned late one time. There’s no returning if you never got there. 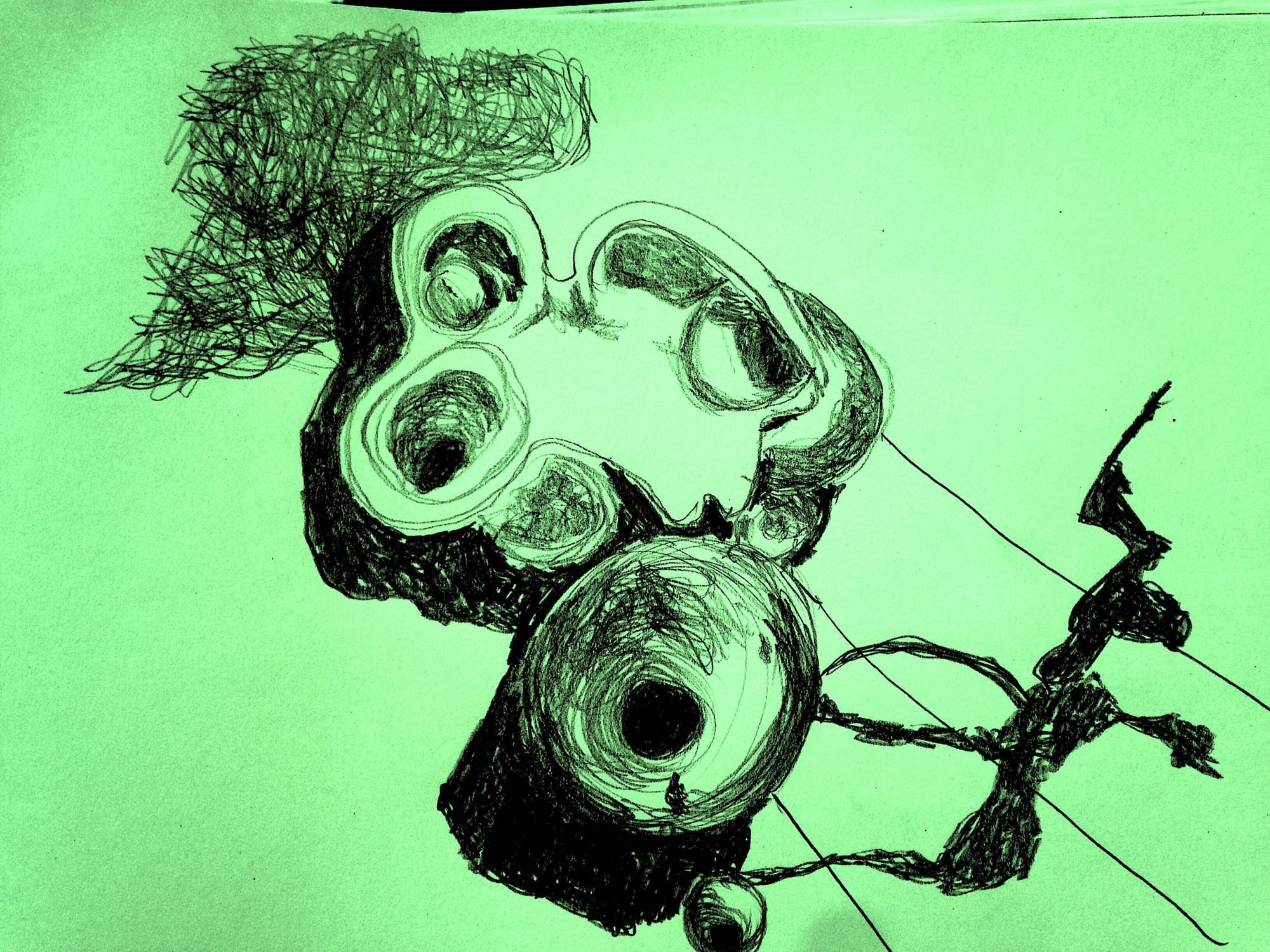