The Buffoonery of Evil 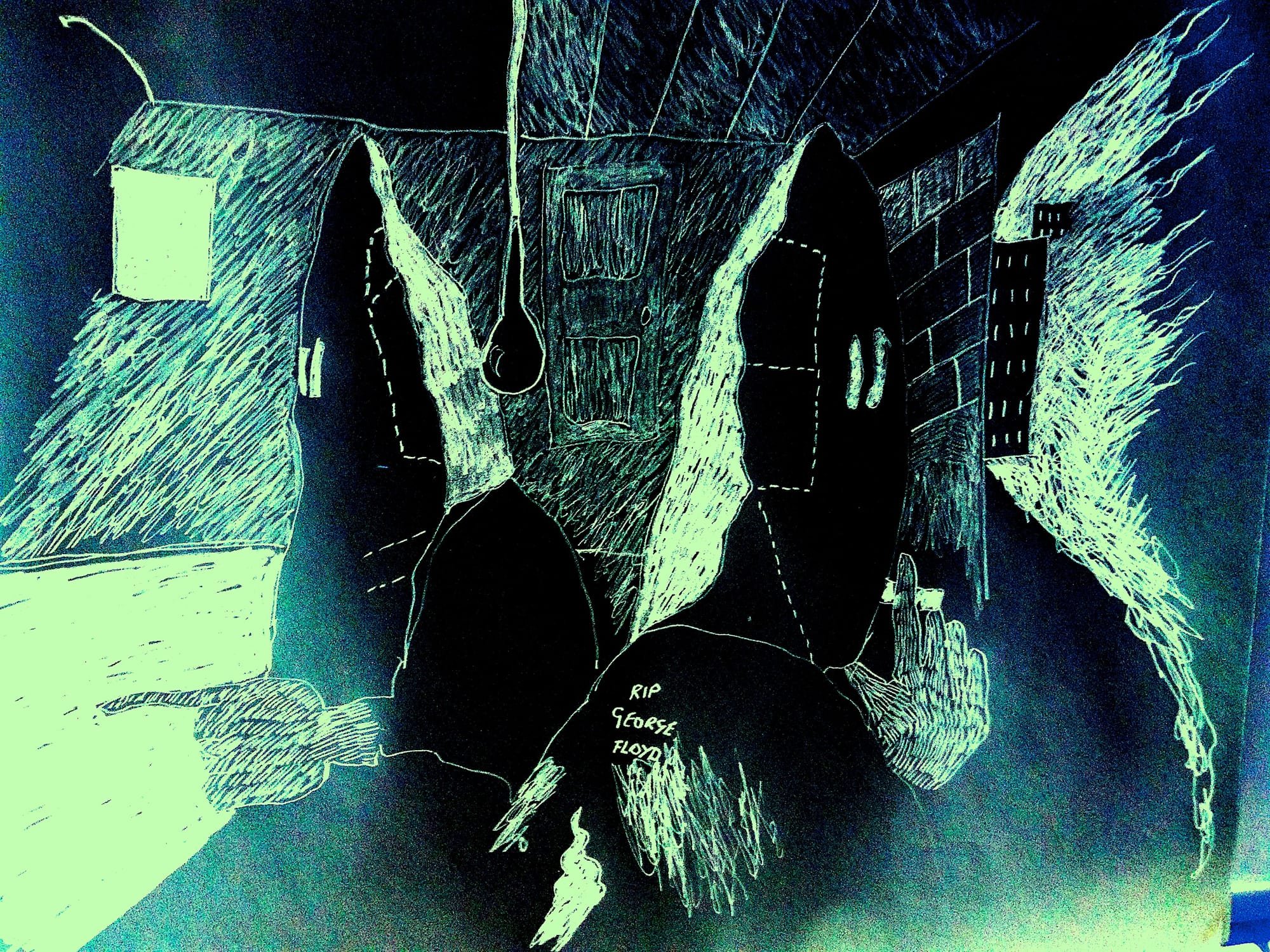 ‘Kaywin Feldman (National Gallery), Frances Morris (Tate Modern), Matthew Teitelbaum (Museum of Fine Arts, Boston), and Gary Tinterow (Museum of Fine Arts, Houston announced that the exhibition will be suspended “until a time at which we think that the powerful message of social and racial justice that is at the center of Philip Guston’s work can be more clearly interpreted.”’

The news is that the big exhibition of Philip Guston the anti-racist artist has now been postponed until later. The gallery directors say the exhibition will be suspended “until a time at which we think that the powerful message of social and racial justice that is at the center of Philip Guston’s work can be more clearly interpreted... We recognize that the world we live in is very different from the one in which we first began to collaborate on this project five years ago. The racial justice movement that started in the U.S. and radiated to countries around the world, in addition to challenges of a global health crisis, have led us to pause.”

I say: Shame on you cowardly directors of the galleries. I say you should put the shows back on because this is a time where we need art galleries to have good art forces beaming out into us and Guston has plenty of those good art forces to beam. All that talk of hermeneutical deficiencies amongst BLM enthusiasts is witless and insulting. What are you saying about the folks supporting the BLM you director guys? That we need to get to your genius level of interpreting first or else we'll get everything wrong? Is that it?

'The buffoonery of evil.'  That’s a phrase we could think about when we’re looking at Guston’s work. The great Trenton Doyle Hancock thinks this is a good thought and he uses it when he’s painting his superhero avatar meeting with Guston’s KKK buffoon avatars. It’s good to have Trenton in the mix because he knows about the marvels and ingenuities of art and philosophy and comics and how to keep us on the right level which is kind, merciful, humorous and human and about not being a dictator. But is also how to say no to dictators from that level too. Stop being a buffoon, Guston and Hancock say, laughing at the buffoonish evil ways and shaking their heads sadly and sometimes angrily, because buffoonery is annoying when there’s too much and when evil, well, it's evil. Which is what Guston always did and so does Hancock.

So the buffoonery of evil thought is good because it keeps us at a level near to where we live rather than looking to go too high or too low, which are both mistakes, but takes us perhaps a little higher than the level where we live so that we can have aspirations for ourselves in a soulful way, which I think is also what we like, to strive to be better souls. And its also good because we are tired of Arendt because her phrase is 'the banality of evil' which is good but then we think 'banal' is a bit of a snobby thing to say, and so is coming from somewhere too high we now think , but we always have to think of her when we’re looking at our world and evil and nazis and especially now Trump is at a high level of buffoonery. So we don’t say she’s bad but we wish she’d be less high so she’d be ok with us watching Star Trek or Murder She Wrote, which I think she’d not be. But we also think that she had to be like that then because of her times and our times make it easier to be , you know, lower. Whew.

Trump. He’s a right wing buffoon of evil and many leaders at the moment are and they all seem to be trying to get as dictatory as possible and some are doing it really well and others are just at a lower level of dictatorship even if they are up there with Trump at the buffoon level. So here’s a distinction: buffoonery and dictatorship, where they don’t always overlap. So the Brazilian Bolsonaro is a buffoon up there with Trump and probably at the same level of dictatorship as well, whereas Xi Jinping and Putin are lesser buffoons but higher dictators, but there’s still a distinction there too, because Putin is a buffoon compared to Xi Jinping but not when compared to Bolsonaro. Modi is getting to be a good dictator in India, which is bad, but he isn’t a buffoon at the level of Trump yet. The same as Recep Tayyip Erdoğan, who's a low buffoon but a high dictator. And in the UK Johnson is a buffoon but not even a dictator with a little ‘d’ because he has a sense of humour which is never good if you want to be a dictator. Which I think he does on some days. But he’s pretty useless at more or less everything except having some jokes, which makes him a buffoon and a pretty high one. Which isn't good given he's supposed to be in charge and is depressing because you think it's only because he's so useless that he's not higher in dictator levels. So it’s good that Guston makes us think about the buffoons of evil and not just because we’re bored with evil always being so banal and Hannah being too high for us.

So it gets us to think about how to engage with the evil at the right level because one thing that goes wrong is when you come in at the wrong one. It's like getting off at the wrong floor in your hotel because what happens is that you don’t find your room, you’re drunk and it ends up being quite embarrassing for everyone involved. This always happens whenever someone starts treating Trump as some high  political thinker with vast ideological depths which makes you think you have to have all the facts checked and do a PhD and feel outraged by fake news, his taxes  and all the sexists and racists around him - plus all the sexy women and the swearing and him being a trash tv icon because before him we thought we could have trash as a po-mo smart-ass lefty counter-punch where we’d say things like  Starship Troopers has a higher art level than Citizen Kane and so on. 'Stop the cocktail party chatter,' we want to say to all this now, and  not just because I never got an invite but because that’s the wrong level, we think.

This is what Guston is shouting out. He’s saying, just see the buffoon as a buffoon. It’s not about not having him at your party because let’s be honest, he doesn’t want to be there anyway. Call him a ‘monster child’ or something and talk about him like that, so if you are growling you’re doing it at the right level and not missing your target!

So you gallery directors really shouldn’t stop Guston coming into sight because he’s shooting at the right level for everyone at the moment I think. You shouldn’t shut down your good thoughts and cringe and be scared of self-righteous mobs at anytime either. You’re supposed to be guarding the art forces and getting the good art out there so the culture gets beams of the good stuff shooting into it. Philip Guston is full of good art and has good anti-racist force too. Stop the weasel words about the message in Guston not being clear. You're just being silly! No one believes you. What I think is that you’re looking for a way out because you’ve lost your nerves. You’ve just become a bunch of bad Buffoons! Not evil, but bad nevertheless. Stop being that! Be better. 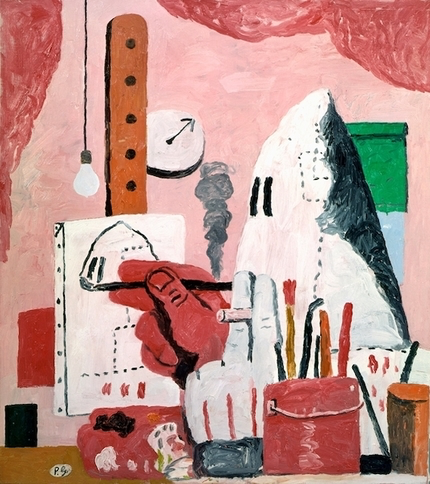