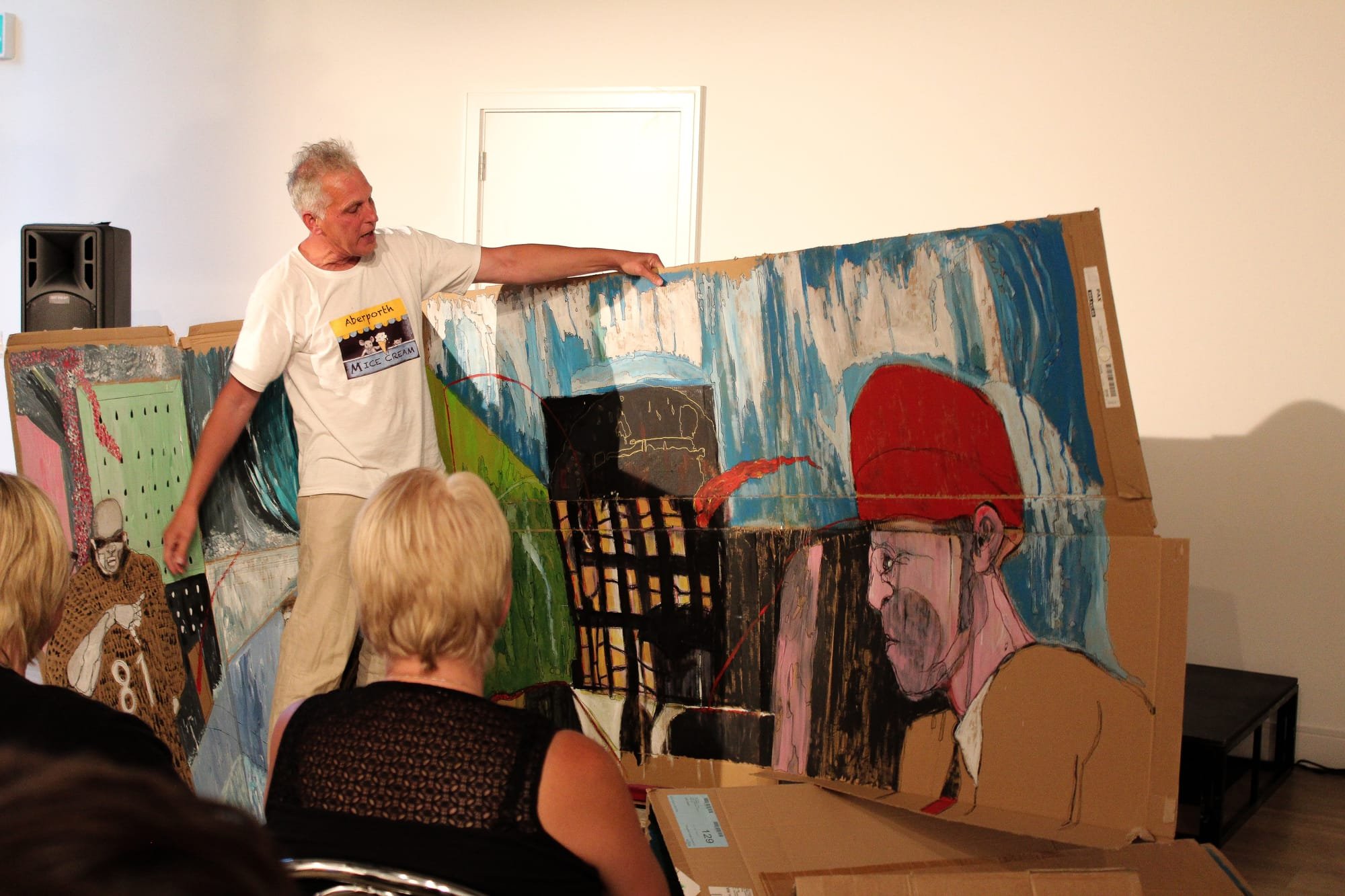 Mandie Wilde and Steven Fowler combined to bring together a great bunch of poets, a big and appreciative audience and me.

The videos of the performances are here: https://www.youtube.com/user/fowlerpoetry/videos

Since the lockdowns big cardboard has not been easy to find so I've been using canvas, so it was nice to get the old stuff out and use again. It also reminded me of how heavy the stuff is. Dragging them to the venue is the real art. At least I didn't have to get it on the tube this time.

The book being used was a Neo-Attack book by Johnny Pulp called 'Pure Beast' which is a psychogeographic novel set in Manchester and Sheffield.

"This letter, it glows in the dark from Lavinia to Old Iron saying 'Darling Iron' - (which suggests a tight relationship or some clinch bravado) -

On the slopes of the Pennines there are brain sketches, murder and critics.

Not far off in the Lake District (but far enough) Wordsworth reminds us - '...we murder to dissect.' The English artist Walter Sickert has the Meat-Dreams of the Whitechappel killings - his illegitimate son was threatened at one time by Peter Sutcliffe, better known as 'The Yorkshire Ripper'. It’s a coincidence, nothing more than a stupid collision of morbidity, two lines of tragedy and sadness on a long, grey horizon, a single point that's like weird and then vanished.

So. In the beginning - jokers .

Anonymous - the worst kind, like he's your bloody Iscariot playing Christ. In every infants cry of fear he was stood behind the open mouth to draw misery through the unbounded space.

'Moab and Ammon and Amalek and Canaan and Egypt and Aram/ Receive their little ones for sacrifices and the delights of cruelty.' Manchester in the 'tortures of Doubt and Despair.'

William Blake with gleaming face and running nose rubs the said snout and says out loud,

'And are the dead cruel? Are those who are infolded in moral law Revengeful?'

He coughs black tar. Takes a blade, scrapes moss and bracken from under his long, yellow nails. Wind snaps across from the north like a Captain's whip, creases him double.

The gentle green of the hawthorn bends and bobs over a long wall.

Too many times dead annihilated moonlight shines over the Moors: Hindley and Brady are the shadows digging the turf. Anonymous the giant light in the darkness plunging in abhorrent blue veins, limbs, loins children in splattered mud, makeshift graves, native accidents of desolation.

The spades square and polish the task.

Lover's sepulchre. Knot by knot, day by day, the long string fastens up the little cadavers into slab meat. And the coin they put on each single eye is the single effort twins erect a dragon temple on the Pennines, backbone of England, Albion's spine.

'I'm playing fucking loud The Smiths then Pulp as background, then foreground.' "