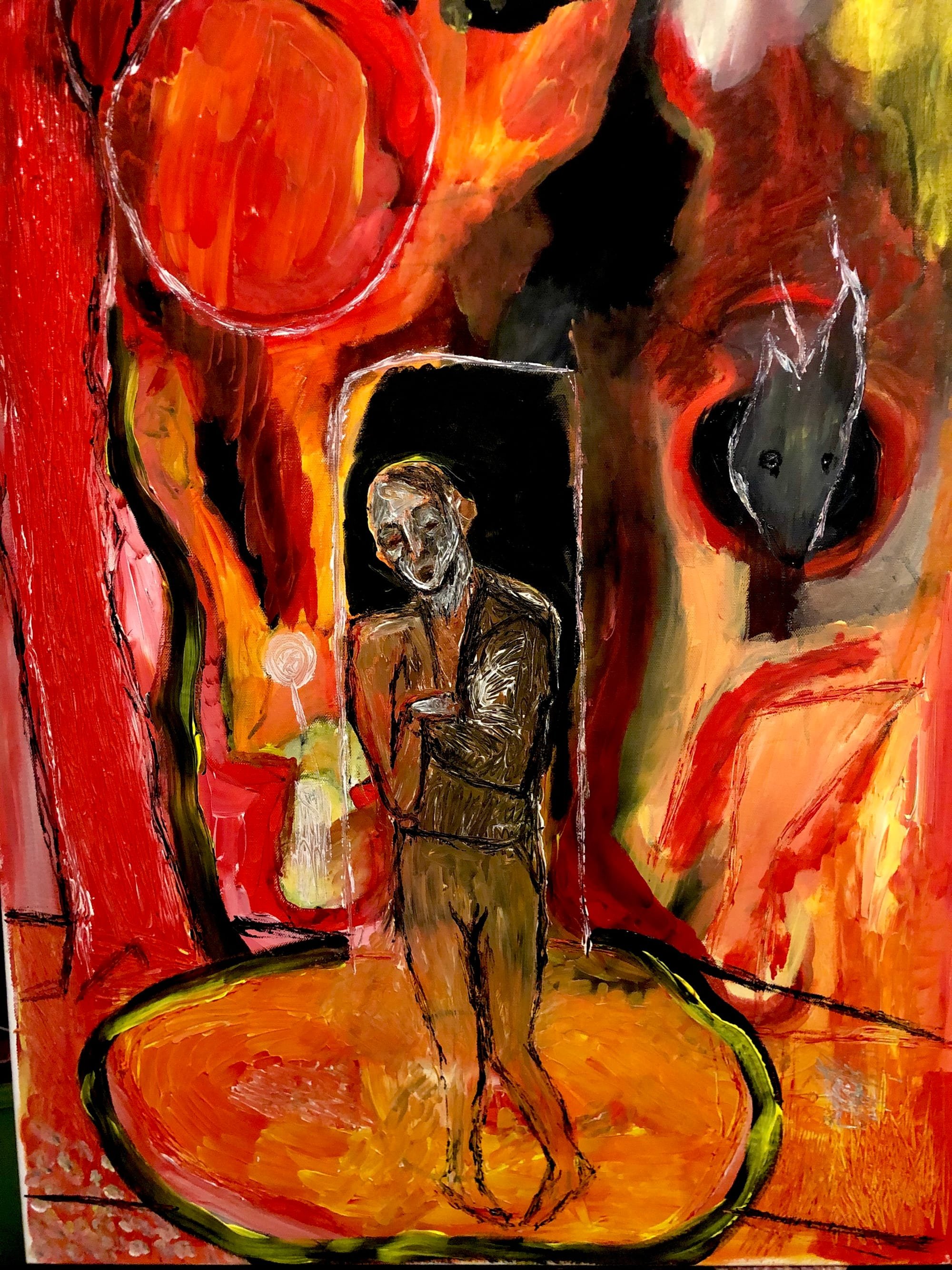 Here are a few more on canvas. As I said, the combination of autumnal/wintery weather and the plague has cut down on my ability to find dry and quality cardboard. So I've been daubing on lovely cheap canvas - but I even ran into trouble with that stuff when my usual size dried up for a time - 40 inches by 32inches. I couldn't find anything like that on line when the shops all shut down again unless I was going to pay out some hefty prices. So I ordered some that were long but thin which is a pretty awkward size that tries to box you in - I don't do the abstract so what that combo seems to demand is long thin landscape stuff or tall thin portraits! So there's been some dissaray because of the adjustments to this. I really didn't know what I was going to do. I don't ever know but with this stuff I was feeling a bit thrown off. Which caught me by surprise because I didn't think I had any habits but clearly I did. The fat oblong was feeling comfortable and this thinner long was freaking me a bit. I'd sit through the night feeling something at the taproot had been cut. Still, it helped me read away from the usual pile of philosophy that I have to do for the interviews. Which since I've not been going to school has become more intense. I read more and more intensely these days. Everything. But I'm in a Dostoevsky mood at the moment. Crime and Punishment is the latest I'm reading. I'd forgoten how vivid the actual murder is and all that anxiety piling up. I read it first whenin my teens and was blown away by it and since then I read it once early on in my teaching and then left it. So coming back to it now is bringing back a whole complication of times, and memories of people long since gone from my past, which is the way it is with me and books. I like to circle round and reread stuff I read long ago - as a teen I read the usual gang - Kafka, Melville, Goethe, Dostoevsky, Gogol, Chekov, Lermontov, Pushkin, Sartre, Camus, Greene, Fitgerald, Flaubert, Beckett, Pinter, Eliot, the Mandelstams, Dylan (that yellow Writings and Drawings book was how me and my friend started writing poetry) - all stuff we didn't look at at school but I had pretty decent English teachers so the Hardy, Miller, Shakespeare, Marlowe, Webster, Hughes, Heaney combo was also pretty decent fodder even though I always prefered my own ideas to listening to others. I'm better in that respect now - seems I wasn't a genius after all!!!!But the point is that reading these things again, with so many years intervening makes them different from the first circle. The past adds to them and so it's a new kind of strange that happens. Anyhow that's what I'm doing when painting, and here are a few more of the canvas daubs. Like I said somewhere before, there's nothing I'm claiming with these except that it's something that feels like I have to do it and when a day goes and I haven't then I feel a slight panic rising which won't go away until I've rattled something off. So it's joined the writing/interviewing/reading in that respect. Which to be honest gets to be tiring. But I'm not complaining. I was chatting with my mum and she does jigsaws and it's the same thing with her too. I think she ends up with better pictures though! The picture heading this blog is a mid size canvas and done early on when my brushes were hard and dry and the paint running out. So it was a bit of a trial to get anything rolling. But since then it's been ok. And having talked about the long and thin stuff I haven't selected any for this post - so next time I'll just show a few of them! Go figure! 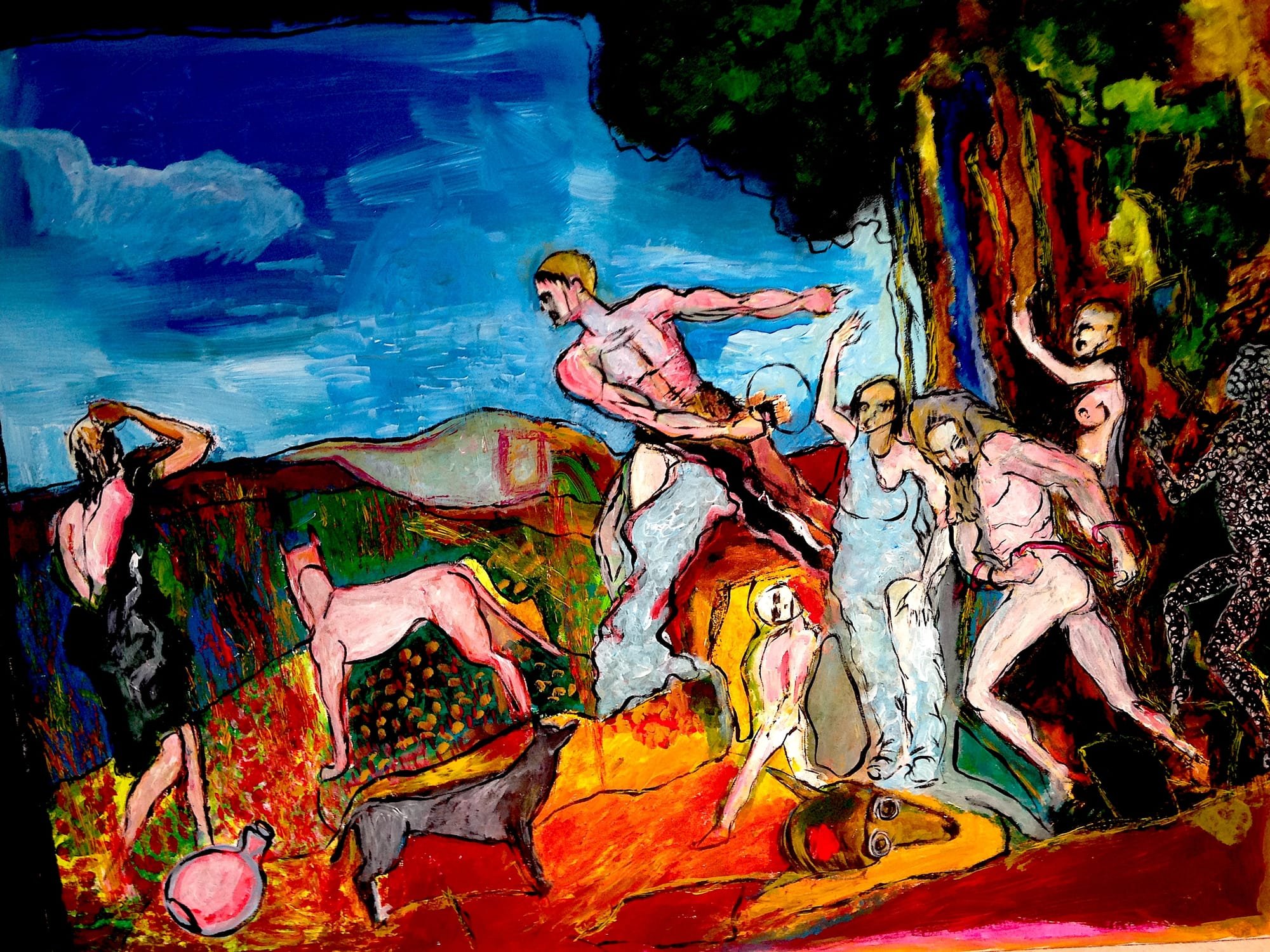 So this one went through a lot of changes but when I stopped I knew it was ok to stop there. This is my fave size - 40inches by 32inches. 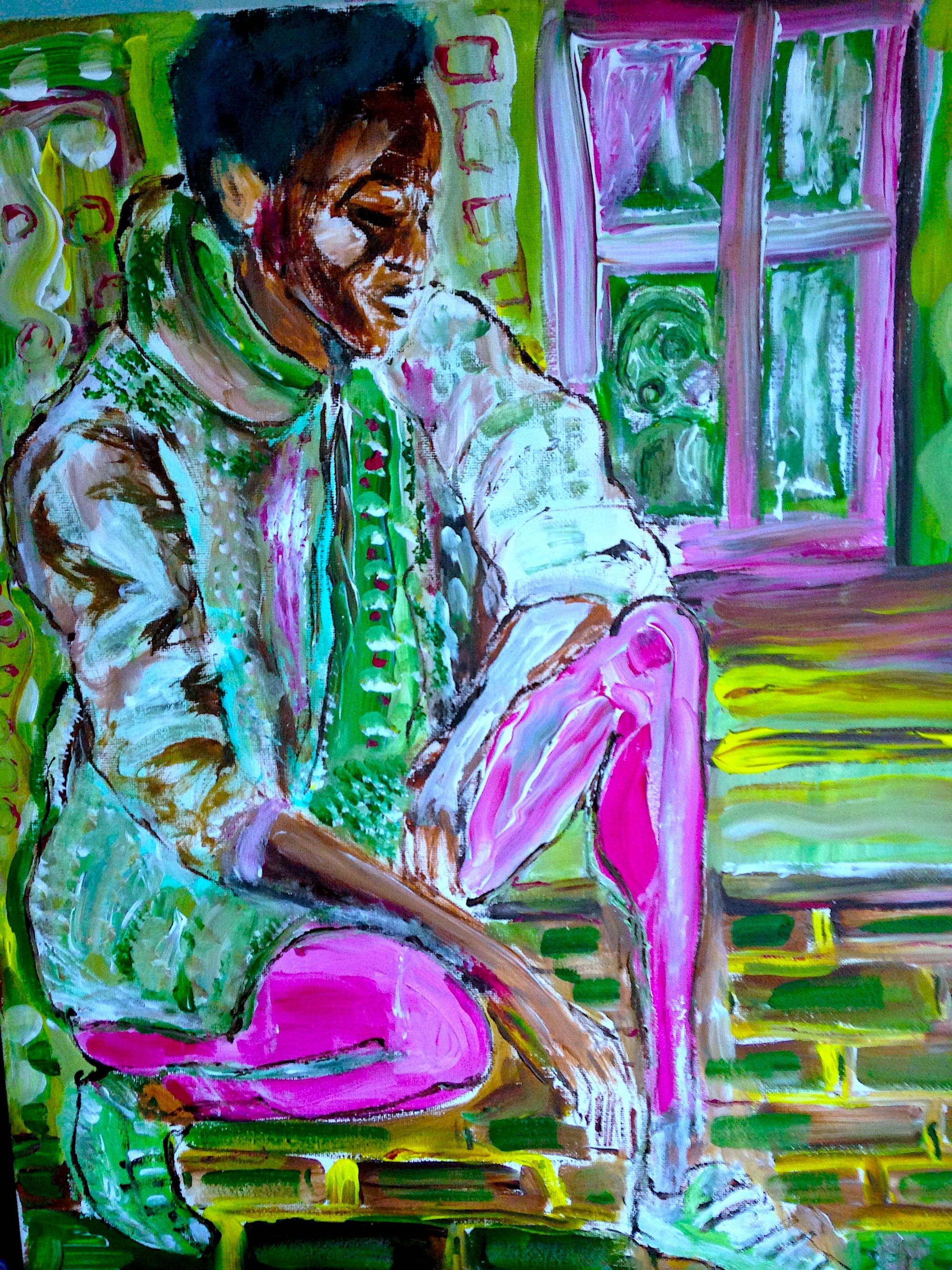 When desperate I was thrown back on very small pieces of canvas. This is just too small for me - to work small you need talent with the brush and line - and I have to say my brushes are abused - often left in dirty water forever until I want them - or dried out hard so they scrape and smudge - so this size canvas gives me headaches.

This is slightly bigger than the previous one - around 30 inches by 25 inches or something - so it's better for me and so Iwasn't as unhappy doing this as the previous one. 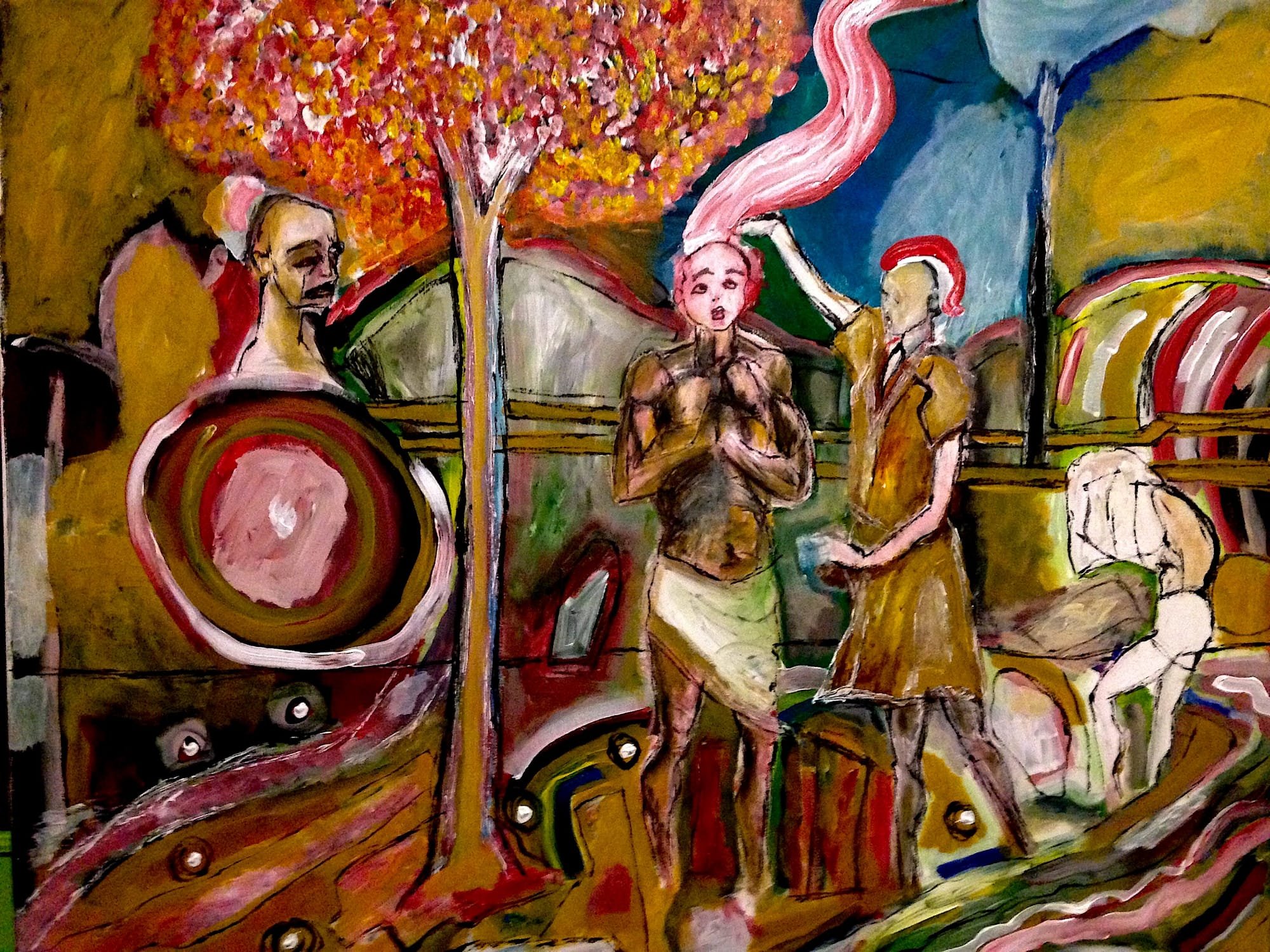 This is the size I really like - like the first one. Actually I don't think this is a finished version. I take a picture when I've run out of paint usually and so have to stop and I never think I'll return to a painting once that happens because because there's no plan once the moment runs out then the painting runs out with it. That's why when I'm doing it I can't take breaks or have a conversation without taking a big risk it's going to be over! But this one I did get back to and I think that face isn't the same anymore, not so innocent which is what happens I suppose to faces and people. 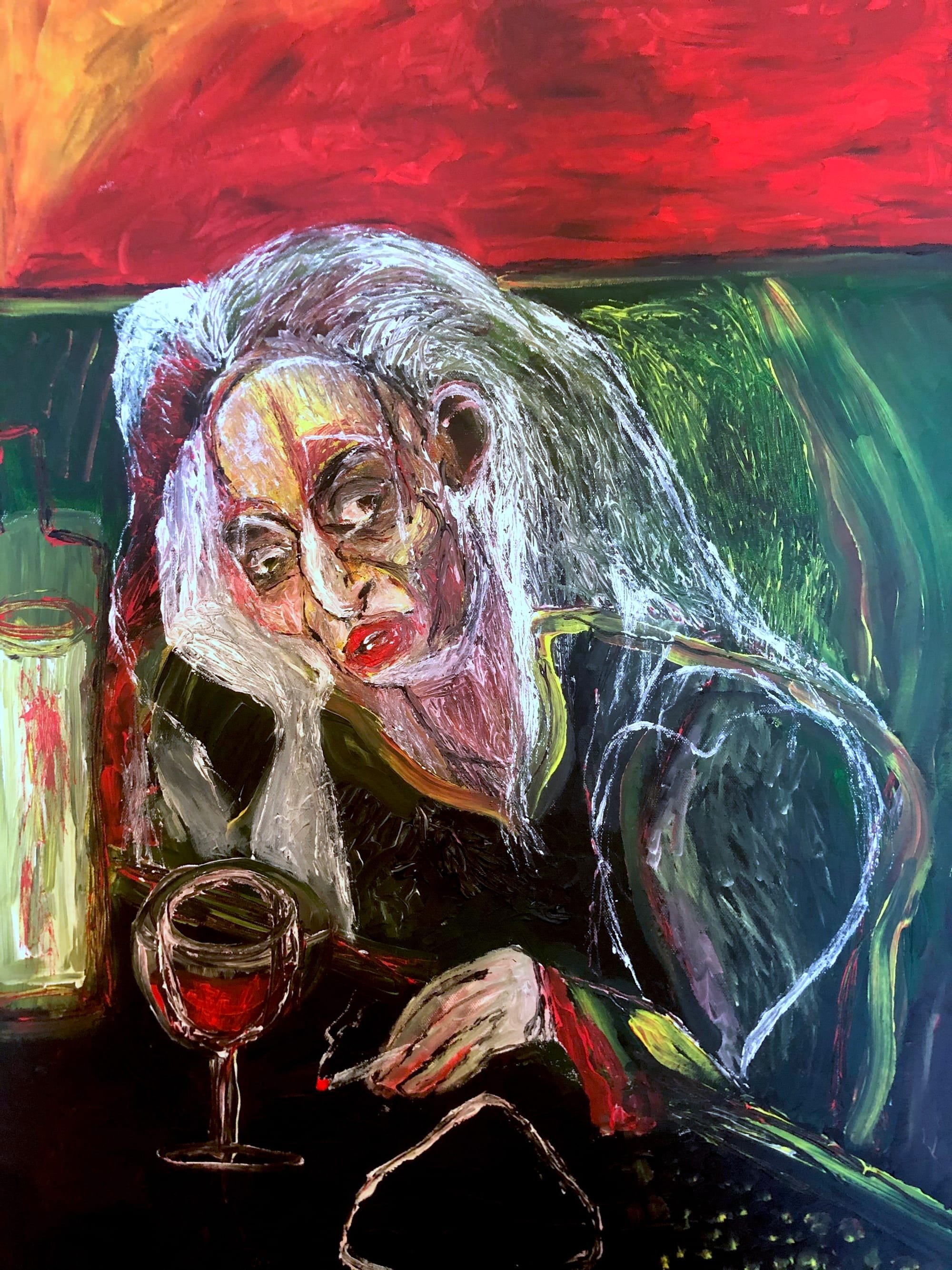 This is a mid sizer but actually gave off a lot of energy when I was doing it - fed back in a loop it felt like. I liked the idea of her wearing her heart on her sleeve - which was the kind of cliche taken for a walk thing that I picked up from Dylan who does it all the time along with his rhymes and thefts. Like Hazlett too, and Stewart Home. 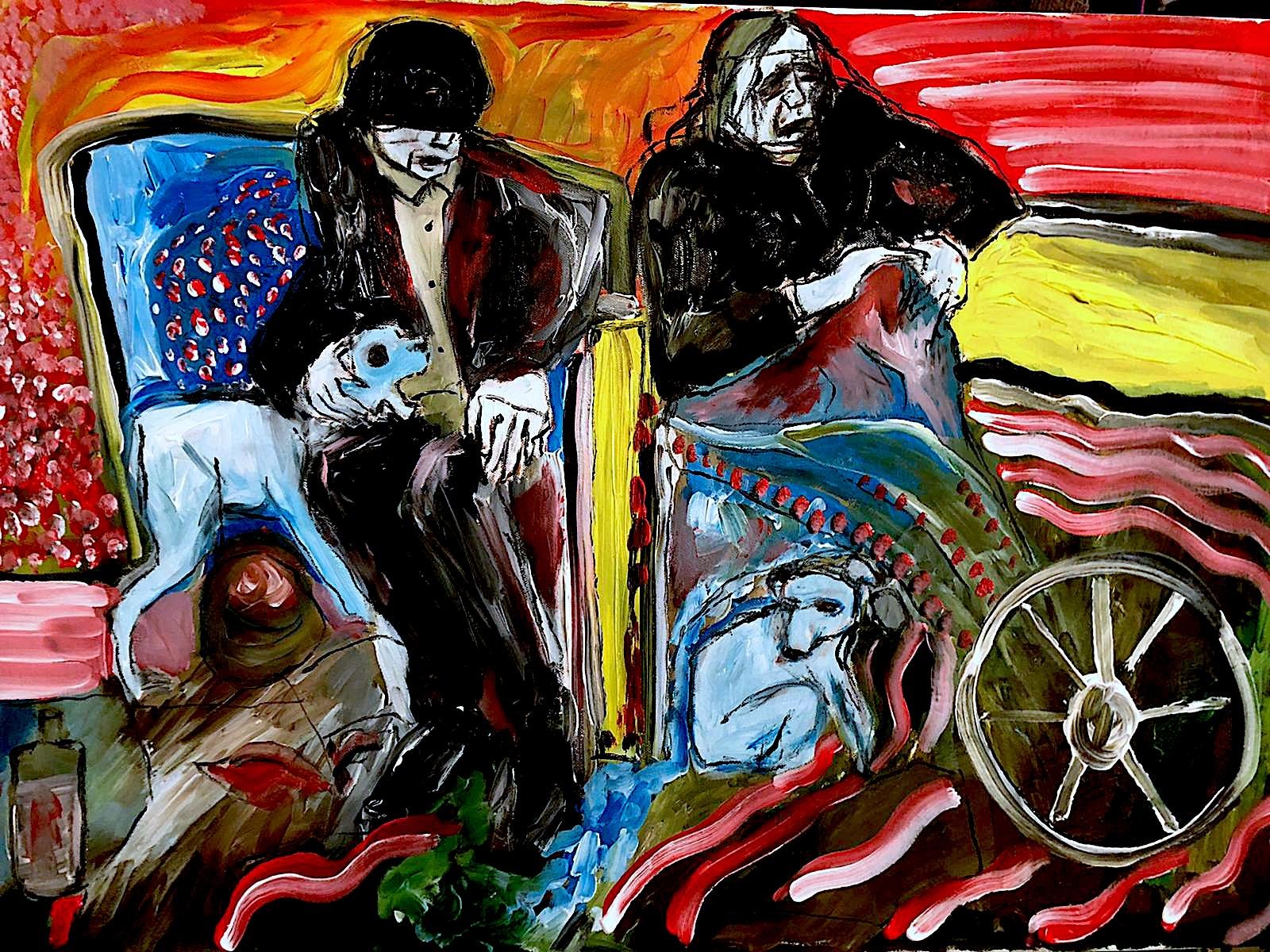 This is another mid sizer and I think I did this just after the one above so you can see that I'd been walking around the town and seeing all these people with nowhere to go or feeling lost. These have been hard times for so many people and it's getting worse as people lose their jobs. What's going to happen? There's not enough being done. I need to do more was really what I was thinking.

And the one below is from the same time and has the same anxiety. It would have been better to do had it been bigger but as I said, there was no canvas like that some days, and this was one of them. I like to have music playing really loud whilst I work. Although there are some that come in on silence - window open and a cold wind blowing around. Trouble is that nearby a drummer has set himself up in residence and likes to work throughout long days so I have to keep the window shut to keep out his endless noise. But he's a session musician and has been hit by this situation so it's all cool and is what has to be. 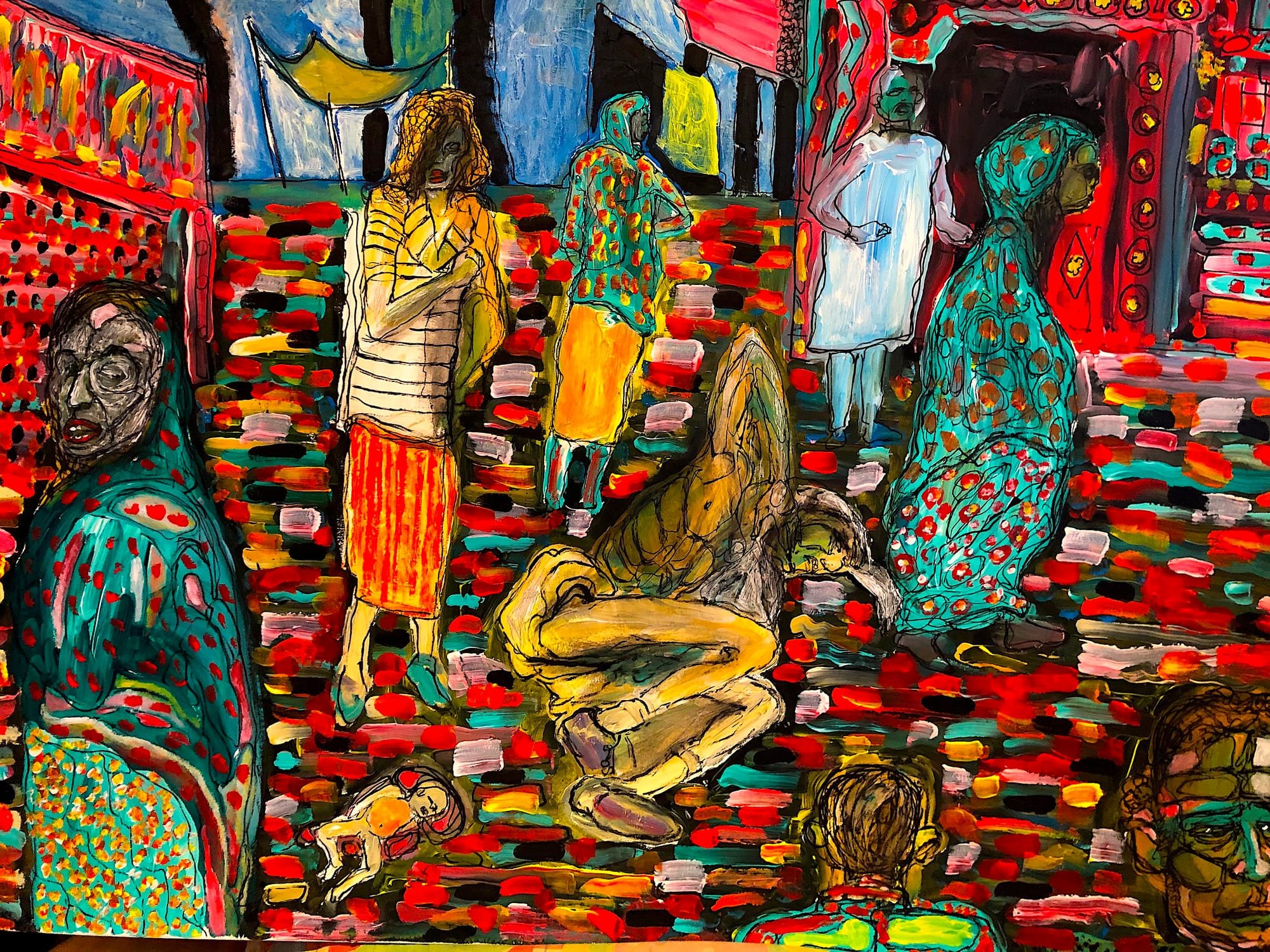