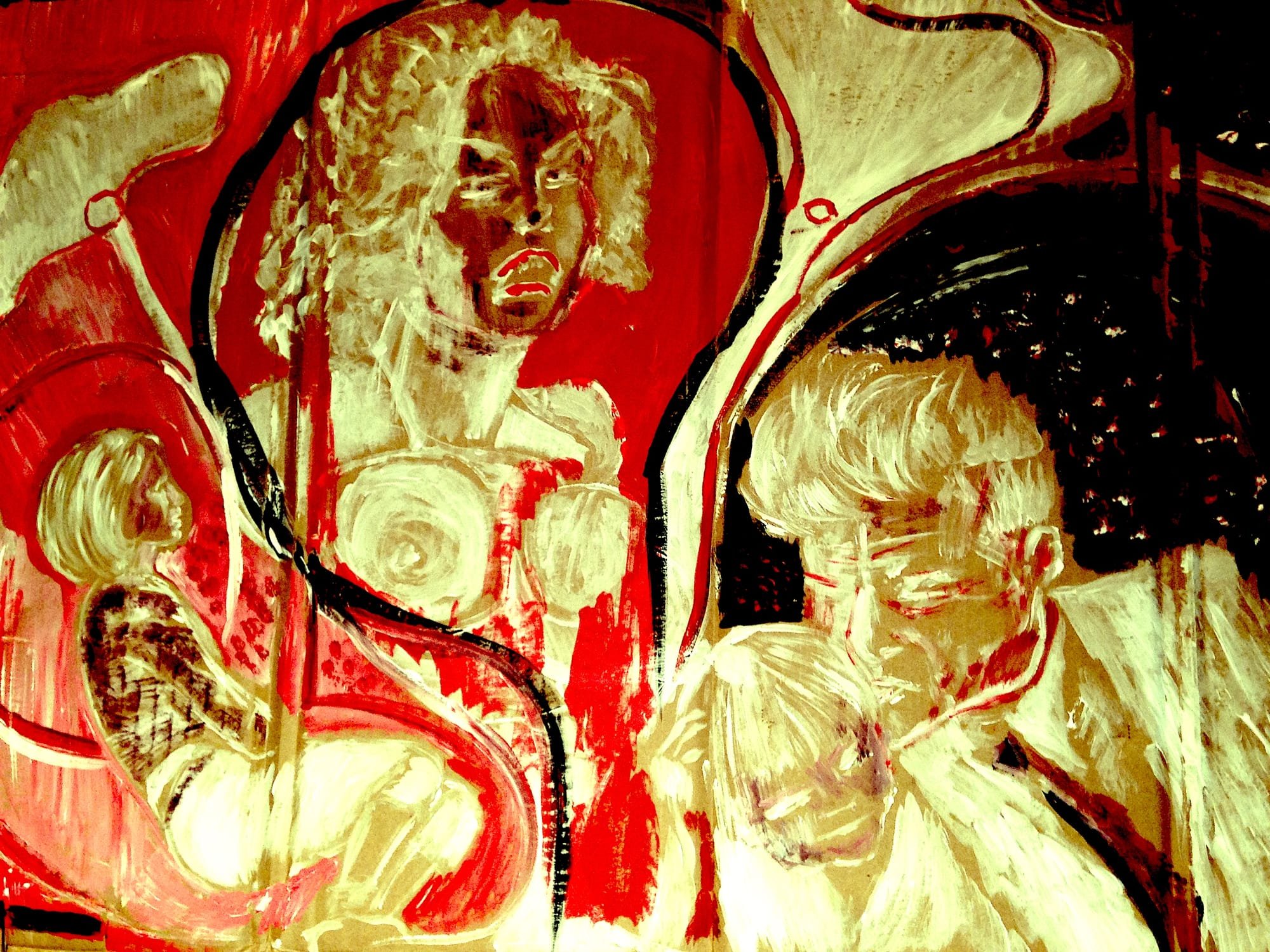 The astonished man across from her was swept back once more by her ingenuity and game of muscles. She believed in listening to the melody and figure in another person. She liked to isolate and delimit it as a unique cell, which required accepting it at the deepest level she could muster. Its strangeness required an expectant patience with whatever appearances and expressions were revealed. She enclosed herself with a sort of kind-heartedness about oddities, because it was in oddities that she’d find enchantment. She often liked to say to herself that what she was after, in anyone she wanted to care for, was their freak-show, their veils of difference that would compel her, relentlessly, humble her and enrapture. She’d be ashamed not to get that far with anyone. That’s where the new beauty in life was always discovered and she knew it to be the only hospitable way. It was where her head and heart congealed. She was never ashamed and so was free of herself. That frightened the suckers of course. But what did it mean in truth? That she could always pay her bills.

‘The trap you set yourself invariably captures others by accident. And you’re left feeling both renounced and diminished, as if by an unexpected insult from a friend. Our lives look good from a mile away. Or via bad habits. Close up and in the flesh, they’re nothing more than what is supposed to be seen from a mile off. All that’s left are our wild anecdotes we try and convince ourselves make everything worth it. But there’s just an awareness that we’re dying a little all the time, and every sentence ends with hello as its hostage.’

‘ My casual life erases the difference between hello and goodbye,’ she added.

It was her way of sending out signals that were more quarantine than plague.

‘ I estimate people by the marks they’ve left on themselves. Everything fluctuates. It’s the only staple product anymore.’

He watched her face shimmer across a backdrop of bilious green Turkish sofas and ottomans, bourgeois chairs with rickety backs, women in hoodies and caps vamping with polite, apologetic havoc boys with bags, sacks, directives and business. The dive was an anthology of ingenuity. Little ears, cunning eyes, narrow foreheads, two legged stools and garrulous streams of motivation and attitude herded tarnished souls and mean phrases. She wanted a smoke. They stood in the doorway on the street and looked honest.

‘ Drink keeps me the same. The city may grow fur but I won’t change,’ she announced.

‘I am always looking to have integrity. But I always end up just being productive.’

‘Ah, the failure of the lost idealist. Me, I’m a curse disguised as art, or vice versa. I don’t understand what I’ve done in the past, nor what I’ve become. I think that’s the difference between living and existing. I don’t think you can go too far but don’t think you should. Which is a kind of contradiction, like being too clever, or being over-prepared.’

She preferred the pubs that indulged her bad habits. They were a contrast to the people who lived within their good intentions. So long as she cleaned up by noon she knew everything would be back to middle earth. She liked to give each discarded try a little grieving before she swept them clean. She had a hysterical fear which she pampered delicately and fearfully, like a stoat in a pocket. She looked at the young man and his smile that tried to reach into her blouse. She wondered if anything between them, given they’d had a drink and a smoke, could rise above a higher form of expediency. His body was a nice try of gym labour, which was pleasing but reutilised and left her feeling it was a little neh, but his eyes had flashes and flurries of communication which might have been genuine.

‘ I suspect this is an epoch where we’re not going to be more than bricks. We’ll be measured against a scale of social architecture. My own sense of grandeur is going to be one that feeds off humiliation and insignificance. All the time I think about this and it makes my skin itch with something more than skin.’

Well, she was doing this as a way of making a diagnoses, and it was faintly aggressive, more so than she had wanted it to be but sometimes in these circumstances she was filled with expectations that were bound to be unfulfilled because there was something about these good-lookers in that they assumed passivity in their companions, no matter who or what they happened to be, and that was bound to be a sort of controlling insistence that didn’t really hold out for the onrush of loving kindness in her nor any kind of benign fortune really. So that’s how it was.

‘You’re afraid?’ he was being polite.

‘When every detail answers to the conception of the whole – a conception about which we know very little and what we do is confused and shadowy, well then, yes, there’s a fearfulness and bewilderment in everything that tempts me. Us. Everyone.’

Her eyes surveyed the dense flatness that seemed to flutter like a wing of some monstrous bird. The pub crowd seemed like a monumental stream. It would kill pigmies. She shuddered. She rolled another smoke.

She felt a new language constantly undergoing changes within. Everything was moving, refusing to freeze in any particular mold. Moving from point to point she glimpsed dazzlingly clear features in her mind, as if she was some mysterious philologist, standing within the confines of her own changes. Languages spiralled through her, as if feeble infants of a great literature to come. She drew on the smoke, sucking into herself the smoke of etymological night. Every time she looked up the scene formed again through a ceaseless hybridisation.

‘When our language decays something will blossom out of it,’ she thought.

There was something boundlessly exhilarating in this. Her life was a kind of ecclesiastical form both threatening and already decided.

‘When you talk you make me think I’m supposed to roll over with my legs in the air.’ She grinned but in its abundance a whole history locked horns. In it was a miasma of lyrical criticism. 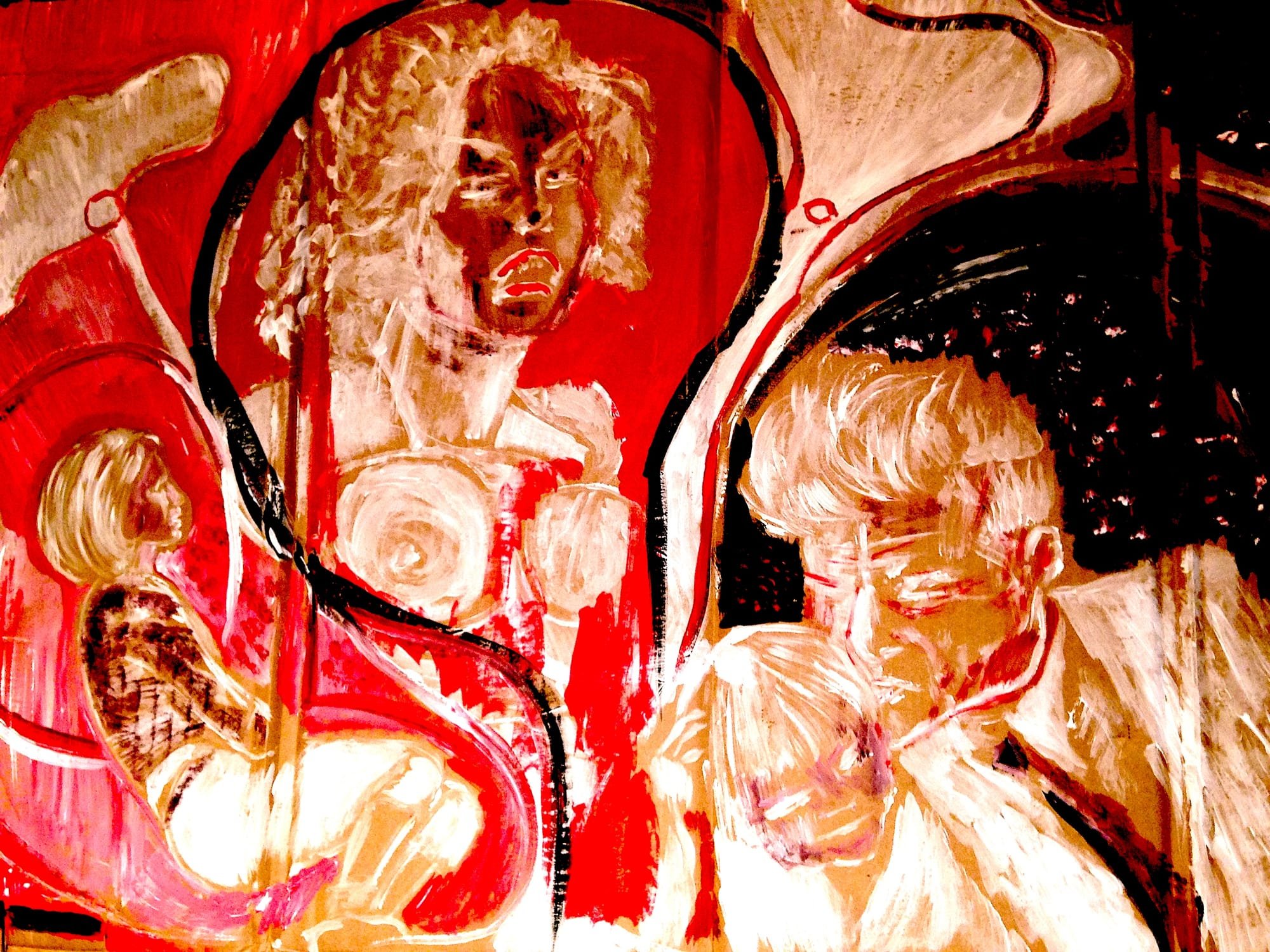