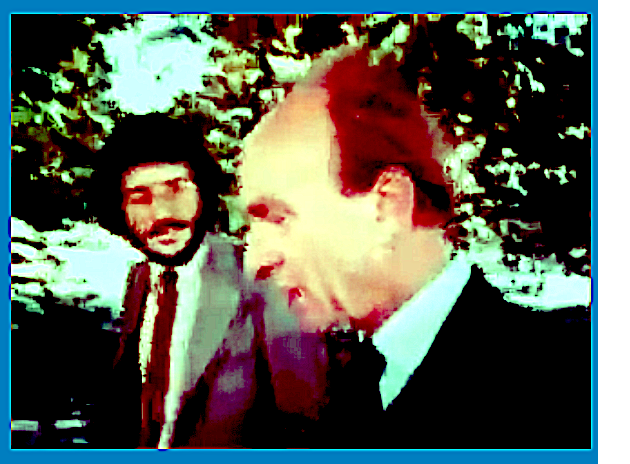 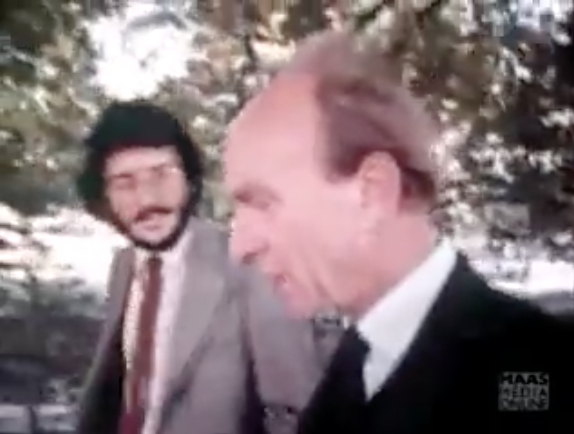 The videotape of Strawson’s and Evans’ conversation makes nostalgic watching for those of us fortunate enough to have worked in Philosophy in Oxford in the nineteen seventies. Both were then highly influential in a vibrant local philosophical milieu. Strawson, the Waynflete Professor, cut a characteristically patrician, quietly authoritative figure and was widely regarded at that time as the best philosopher in Britain. Evans was the most mercurial, fluent and energetic of a group of philosophers at the beginning of their careers that also included Chris Peacocke, John McDowell, Derek Parfit, and Simon Blackburn. He was generally regarded in Oxford as the young philosopher most likely to have a major impact on the subject. Seeing the two of them sparring in the, as it seems now, slightly comical, mannered style of Oxford of the day is a reminder of a time when it was still taken for granted that good philosophy might as easily happen over before-dinner drinks as in the pages of the journals or an intensive research seminar.

My own philosophical relationship with Evans had not really started in 1973 — it began to grow a couple of years later in the meetings of the small discussion group that he, McDowell, Peacocke and myself formed in 1976 –  (Strawson was also a participant for a while later on) – which focused on issues to do with truth and meaning. At the time of the Open University recording, my main form of interaction with Gareth had been over a weekly game of squash. (I recall his tactics, a bit like his philosophy at that time, involved trying to murder pretty much every ball.)  I remember us talking a bit, before and after games, about reference and singular thought but not at that time, to my present recollection, about truth. As Huw Price has reported, Gareth confided in me on the morning concerned that he was apprehensive about the conversation with Strawson. I was surprised, since he always seemed supremely confident, and asked him why in that case he had agreed to do it. His answer epitomised something of his attitude to life in general: it was that being “windy” about something was a terrible reason for not taking it on.

Reviewing the Open University conversation now, my main reaction is to speculate how it might, or should have continued if they had been able to run on for a second half. The state of the game at the conclusion of the exchange is that Strawson has kicked off by applauding Ramsey’s formula that “A statement is true if and only if things are as one who makes that statement thereby states them to be; and a belief is true if and only if things are as one who holds that belief thereby believes them to be,” but has implicitly interpreted it as expressive of a realist, correspondence conception of truth. He has immediately acknowledged that it therefore occasions some discomfort when as in the case of some ordinarily regarded truth-predicables, such as mathematical and moral statements, “the world” seemingly fails—unless we are willing to countenance mathematical platonism or what would then have been regarded as an outré form of moral realism—to keep its side of the bargain, that is, fails to offer up appropriate genres of states of affairs, genres of “things being thus and so”.  He canvasses two forms of response to that discomfort. One is to understand the notion of truth when applied to statements of these apparently problematic kinds as some kind of attenuation and extension of the correspondence notion— truth for morals and pure mathematics, he suggests, may be grounded in their “acceptability” on the basis of the truth of certain other statements/beliefs for which worldly correspondence does seem the right kind of way to think about truth. . The other response, very familiar from 1950s philosophy of language, is to dispute that with morals and mathematics we are really dealing with genuine truth-evaluable statements at all, rather than indicative expressions of e.g rules or imperatives.

Evans seems unimpressed. He responds that the first of these suggestions both overgeneralises—since ‘acceptability’ on the basis of correspondence truths can extend to non-truth evaluable kinds of speech act like commands and wishes— and undergeneralises, since there seems no clear prospect of explaining how truths of complex number theory or transfinite set theory are ‘acceptable’ on the basis of certain worldly correspondence truths.  But he agrees that we should indeed accept the Ramseyan account, only under a ‘thin’ (metaphysically anodyne) interpretation of it — in effect as simply an endorsement of the platitude that one who asserts or believes P does so truly just if P. He agrees that it should be a priority to hang on to a uniform account of truth, applicable to all the kinds of indicative sentences that permit of congruent substitution within that schematic platitude. He agrees too that there are important differences between truths about middle-sized observables and moral truths or those of some branches of higher maths but wants to resist any suggestion that the theory of truth is the place to account for these differences. Truth should be “undifferentiated’.

Strawson’s next response marks the most crucial move in the discussion. It is that since Evans has agreed that we should seek an undifferentiated account of truth, a challenge arises to explain its generality, to explain what accounts for its applicability throughout the wide variety of contents that discomfort the simple correspondence thought. He considers himself to have at least indicated a direction for meeting this challenge and charges Evans to do the same. When Evans responds by suggesting that the congruent substitutivity of a clause within the schema, “He said that P and P”, is a mark of the applicability of the notion of truth, Strawson dismisses this as mere “demarcation” rather than a proper explanation of the generality at issue. Evans then offers the idea that embeddability within contexts of propositional attitude – he singles out belief in particular – might be a step in the direction of meeting Strawson’s demand. Strawson replies with the suspicion that the scope of believability is anyway hardly more perspicuous than the scope of truth-evaluability. And there the exchange comes to an abrupt end, without a winner or even, perhaps, a leading goal.

So how might the game have continued had there been a second half? My advice to Evans in the dressing room before the resumption would have been to press Strawson on his distinction between demarcation and explanation. Strawson contrasts “demarcation of the class of things that are true or false” with — what he assumes is needed —, “ an explanation of the extension of the coverage, the range of that class.” It seems he wants an explanation, for those things which may be demarcated as truth-evaluable, of what makes them so. Evans should therefore have replied, in keeping with his deflationary or ‘thin’ interpretation of Ramsey’s formula, that there is no further legitimate explanatory demand. Ramsey’s formula, thinly interpreted, is an early deflationary characterisation of the meaning of the truth–predicate. What accounts for the applicability of a uniform notion of truth to each of the variety of judgements illustrated by “The cat is sitting on the mat”, “The duplicity and casuistry of most contemporary politicians has become boring”, “28 is an even perfect number” and “Human slavery is unconditionally wrong”, just is that each is a proper substituend within, putting Ramsey’s thought in more recent dress, the Disquotational Scheme.

Strawson would doubtless have resisted this turn, but resistance to it has to be resistance to deflationism itself, to the idea that ‘true’ denotes no metaphysically substantial property in the first place. I myself would have wanted at this point to interject the reconciliatory thought that there is a way both to allow truth to be substantial and to allow it to apply unequivocally, without any need for further explanation, throughout the range of statements and beliefs to which both protagonists want it, “undifferentiated”, to apply. This is to permit the concept of truth to apply uniformly and primitively across the wide range of indicatives that Evans and Strawson agree it should be applicable to, but to allow what a judgment’s falling under that concept may consist in to vary with the broad type of judgment concerned. This thought takes the key step towards alethic pluralism. As we now know from the work of Doug Edwards, Mike Lynch, Nikolaj Pedersen and others, and myself, it may be implemented in significantly different ways. Nothing of the kind was on the radar in 1973. 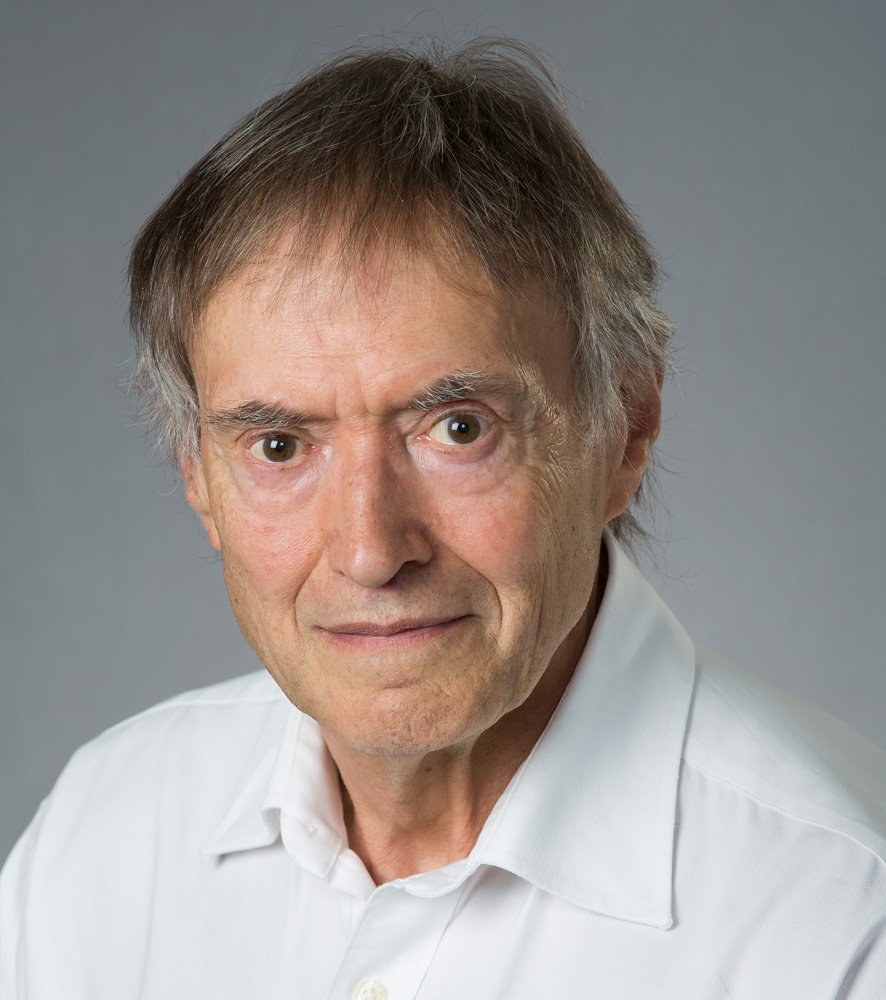 Crispin Wright is currently Global Distinguished Professor of Philosophy at New York University and Professor of Philosophical Research at Stirling. He has held full-time posts at Oxford, where he was for nine years a Fellow of All Souls, St. Andrews, where he founded the Arché Centre and was the first Bishop Wardlaw Professor, Aberdeen where he held the Regius Chair of Logic, and Michigan where he was James B. and Grace. J. Nelson Professor. Most of his published research has centred on the philosophy of mathematics and logic, traditional epistemology and the legacy of the later Wittgenstein. 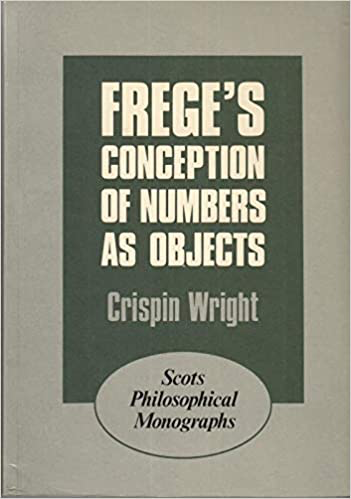 Frege's Conception of Numbers as Objects. 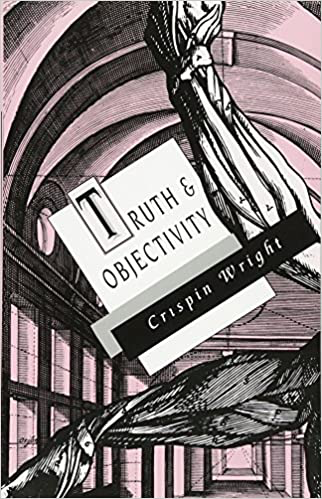 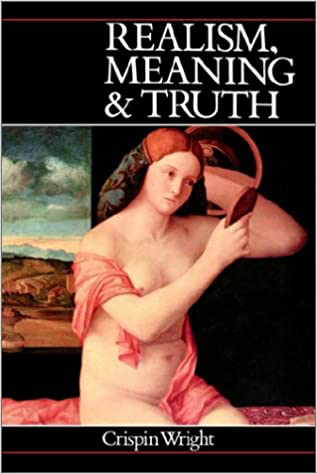 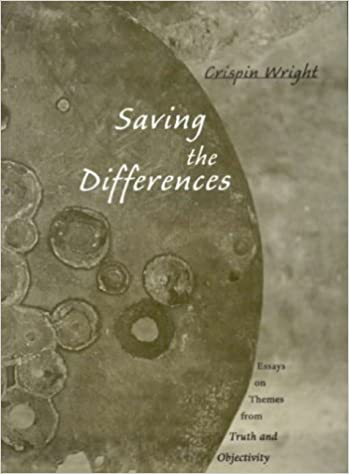 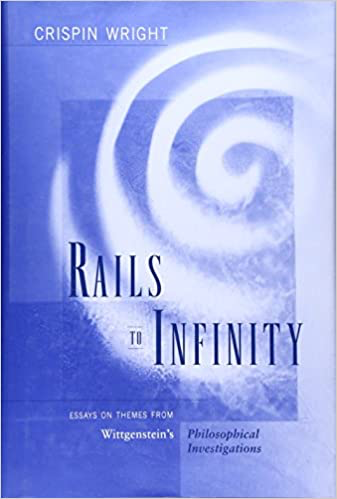 Rails to Infinity: Essays from Themes in Wittgenstein