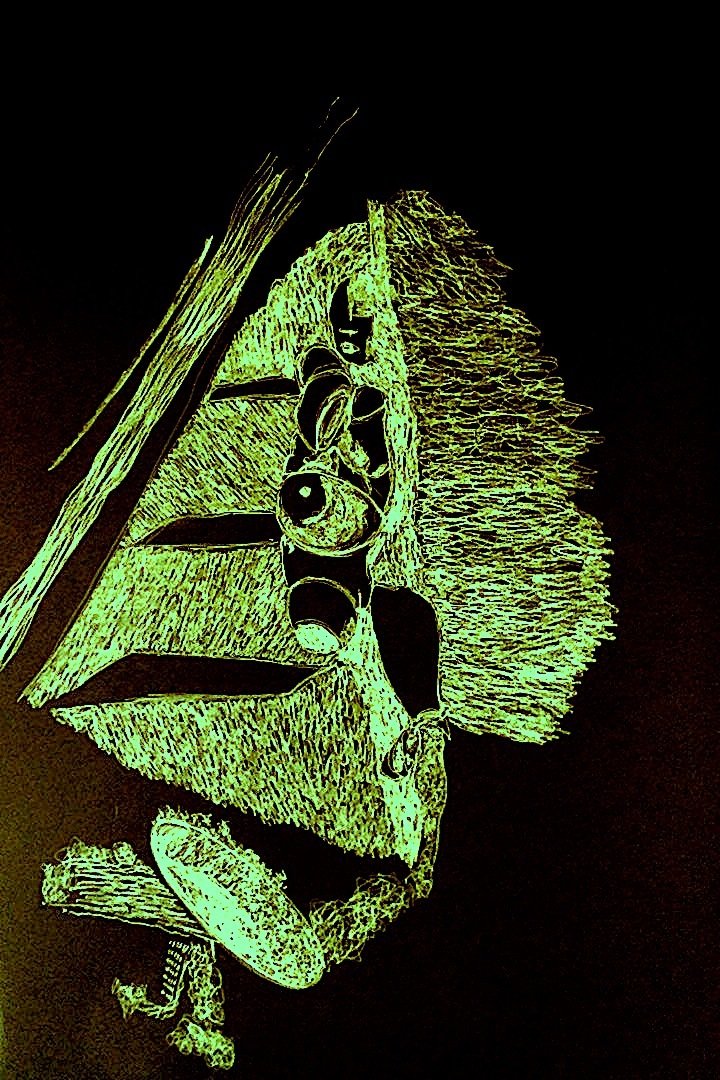 Even the food isn’t real food. Johnny did not come back. The theme of lost identity has been distilled. At first he was swimming in his mind. Then he says his ideas are swimming. Then he says his mind is a drug. He says it grew over the mines and the fields and woodland like an intrepid vine. He’s a product ideal for a ‘ long creative sojourn of a solitary nature.’ He visits the woods thinking he’s going on a trip to a familiar dream world. But when he awakens he doesn’t know where he is. He’s lost in woods that he should know. He doesn’t even feel at home in his own body.

‘I am not coloured inside the lines,’ he commented. A second thought occurred to him at this time. Maybe he didn’t want to be.

Fear turned woods into an unrecognizable nightmare. Johnny never does escape, no matter how hard he tries to tell himself he’s in a place he knows and loves.

One of the most important moments is when he wakes up after being stuck without a personality. During his vacancy we see repeated reminders. Maybe one of them will be able to wake him up to his true identity. Remember . Remember ? Remember Eleanor and her red heels? The hedges and sunlight? Remember the dark interiors. But he doesn’t. Because the context is missing. We’re fooling ourselves if we think that all we need is a particular scene from Sunset Boulevard.

‘Tell him to forget about her car. Tell him he can get another old car another place.’ It’s the mother’s voice. The voice of someone who isn’t supposed to be talking at all.

What’s so special about this scene? He’s Norma Desmond at Paramount film studio asking for a meeting. It’s the scene where she should have known better. She goes to the studio thinking this will be her triumphant return to the silver screen. For a brief moment it’s like she’s back in the spotlight. But it turns out that it was about whether someone could rent Norma’s car. Reegan’s cars were big golden Fords back then. Cars are vehicles of intention. They first talk about luck. Johnny’s big day turns out like this. His hope for triumph hovers like an uncanny opposite.

Is there such thing as luck in this life? Occurrences that might be considered lucky or unlucky bend to fate. The morality of fated universes is tight. Whatever you do it’s the best choice. It’s also the worse. Doing the impossible is evil in this world. Impossibility has nothing but bad intentions. Johnny’s doppelganger world is both sides of the same coin. Johnny has nothing but good intentions. His double has nothing but bad. If he’s neither, he's unable to act. He stays out of trouble. Sure, there’s plenty of trouble yet there’s something obviously just coincidental enough to give people around him the general impressions that probably nothing is wrong.

But how does he even stay alive? It’s pure channeling. We couldn’t ask for more appropriate a setting for a story. Is his a pure lucky streak? Obviously not. The higher power is much more than an uncanny image. Johnny’s luck goes way beyond . Every event works out so his good fortune rubs off. Even the dumbest little thing. But there’s no such thing as dumb luck. All this love that spreads around and he receives in return is intentional. By way of contrast it’s pretty obvious what kind of luck you’ll have if you get involved with his double. Everyone there ends up. Here’s where intentions collide with their vehicles. He takes a knock on the jaw. A crushed cheek. He repeats the word ‘dad’ while rubbing his face. Heads for good luck. Tales for therapy. Before getting into the back . The vehicle that delivers happiness and good intentions isn’t obviously for him. It feels like something happening in passing. After a few close calls he reflects on how luckily he hasn’t ended up dead. After encountering hearts of gold he lives as if it’s a gift.

He remembers in a ditch a long black Merc lorry. It lies on its side throughout a year of his very early childhood. It’s a strong memory of how darkness topples over. Once he rubs his face until the skin is raw. Each time imparts some doom where he ends up feeling switched off. Settling delivers bad intentions. His stories become vehicles of intention. Stories are a world of lorry drivers.

They strike Johnny as bad guys in their big black lorries. They’ll run kids down into canalised ditches. They’re hopped up on drugs. Muscle-flamed red-necks with crap family mini vans and crap families causing random gun violence. The sickness of that oppressive fear in the air jams up Johnny’s head with negativity. It only stops long enough to sell you some commercialized false happiness. What he desperately needs is to go home to love. But he can’t go home again. The story was hijacked by evil when the doors were closed and now it’s unrecognizable.

His story is overtaken. It stokes up on frustration and anger. It’s powered by evil. The white house looks like blank paper, the kind never filled. There was a bar where bikers and truckers stopped for entertainment. Sunday mornings, complete with a red curtained stage much like motels that are in between places for different souls night after night. Here’s a place for false stories on false roads. Johnny migrates to this place looking for soft conclusions. He draws it in through the nose. Everything is a fighting red and sordid power. The strippers seem underfed. The beer too indecisive. The huge men trapped spirits. The image reflects his soul in the puddles in the ashphalt outside the first window. Red curtains reflected in oil are like the second go-round. They're a harsh symbol of the dream space. It ends up a dive bar with prostitution and drugs but also a secret meeting place for secretive friends and lovers who want to keep their secrets secret. For Johnny it was a dark mirror of a better alternative. Tough bikers play nothing but love songs. Everyone was bound together. The endless maniacal violence was in balance and alive with mystery. Johnny played being Marlon Brando in the 1953 film The Wild One. He was working to corrupt his own take on youth. His small town experience had these implications. Havoc at night, recriminations by daylight, he roamed within small feral gangs. He smelled the sweet summer lanes as resigned knowledge. Confrontation exposes a fear and darkness. He gets caught in the balance between love and delinquency.

The core idea is the love of the small town girl. She exposes the darkness so Johnny can recognize the light. But he misreads the arrangement. He should have been swinging with a bright future. Instead he becomes stately and seriously eliminates his Brando impression. He’s no longer the bad boy with a heart of gold. The product is only here to pay respects to a dying town and then leave. Love and friendship have no place here anymore. He sees only a loveless husk of a town. Love takes a backseat to violence and depravity. Tricks fly through the windows. It’s fear invading the meeting place of love. He’s now a nexus for stories where trashy people drop in with trashy vehicles to talk trashy gossip and fight each other. He’s now nothing like he seemed. He’s not what he’s supposed to be. He’s taken over and reflects knowingness and intuition. What’s true is this: inside something is not right.

All this because he’s young at heart. All of it too easy of course. All information is ambiguous if it touches apotheosis. If there's exuberance in beauty there’s illusion in unity also. Solipsistic intensity offends the virtuous. Some mitigations run away with themselves and then, inevitably, others. Overhearing himself is a kind of secret representation. Things inevitably fall out. If we can recognize Johnny there’s a strangeness in it, and at once a familiarity. It’s always been there it seems. There are human circumferences in him, sure, and he seems where he belongs. He harbors equivocal tributes. He confounds. He’s not exactly an accident throwing his stars around. But he’s careless all over. His largeness is indifference. If we only finds words for what has already died then there’s a contempt in any speech. There’s a kind of emptiness where we wander and weep. It’s not about sincerity or truth.

There are some intricate variations on meditative ecstacies of apprehension. Johnny evades himself. There’s nothing like a play except another. The meaning of a word is always another one. There are more contexts for explaining than we are capable of supplying. The terrible desolation surpasses us. Grief drives us mad. Even in ruins there seems something that shouldn’t be forgiven. Johnny is a recalcitrance larger than shared reticence. If degraded more than is strictly necessary, we are denied scenes that might reconcile us with his plot, his revelations, whatever might bless him. There's a cosmological emptiness. He’s bereft and thrown. Too much gets incarnated for there to be release. What if he rescinded his previous lives? Would he know what to make of himself even if he didn’t? Everything is incommensurate. There is no compromise or healing. It’s as if we’d find a message etched in his cells: 'The weight of this sad time we must obey.'

Everything seems against itself. There’s no support in leaning alone. Sometimes its as if he concentrates his character in limitations. He overhears himself in the drear antics of his cold and accurate double. They never address each other even when they share space. There are times he contemplates his coldness such that it passes from irony to pure tonality. He speaks out loud to overhear himself and startle himself. He is spelling himself out as a bemusement. Even if his responses change as a result, his nature will not. He’s not possible as baroque. His torments stem from his own image looping. 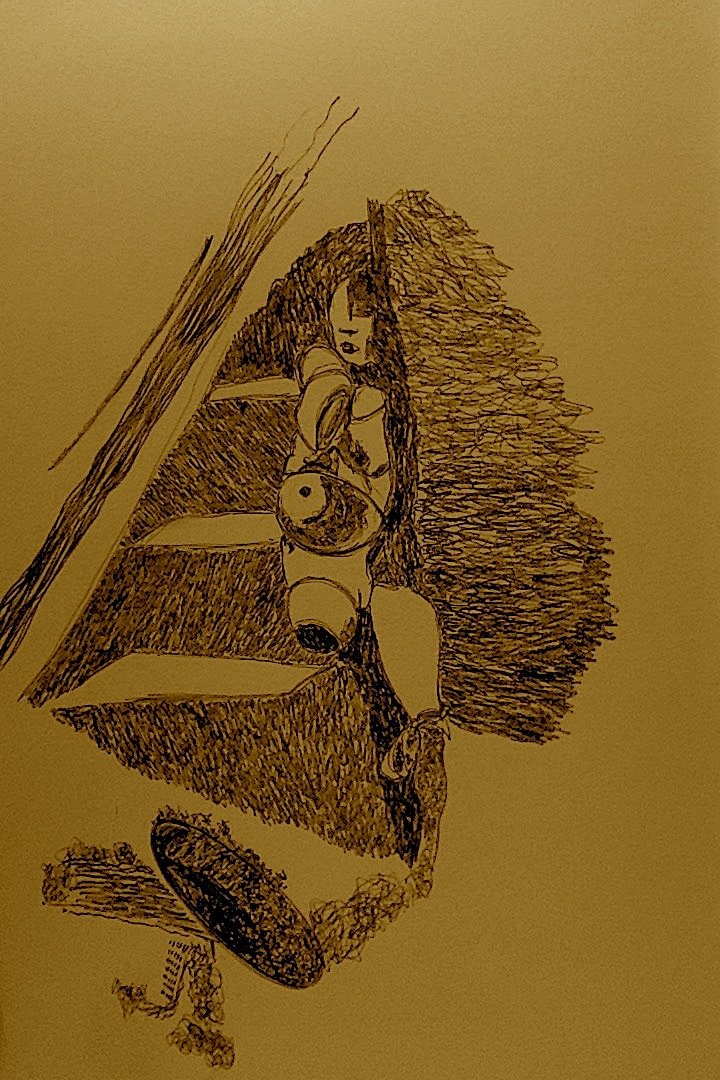