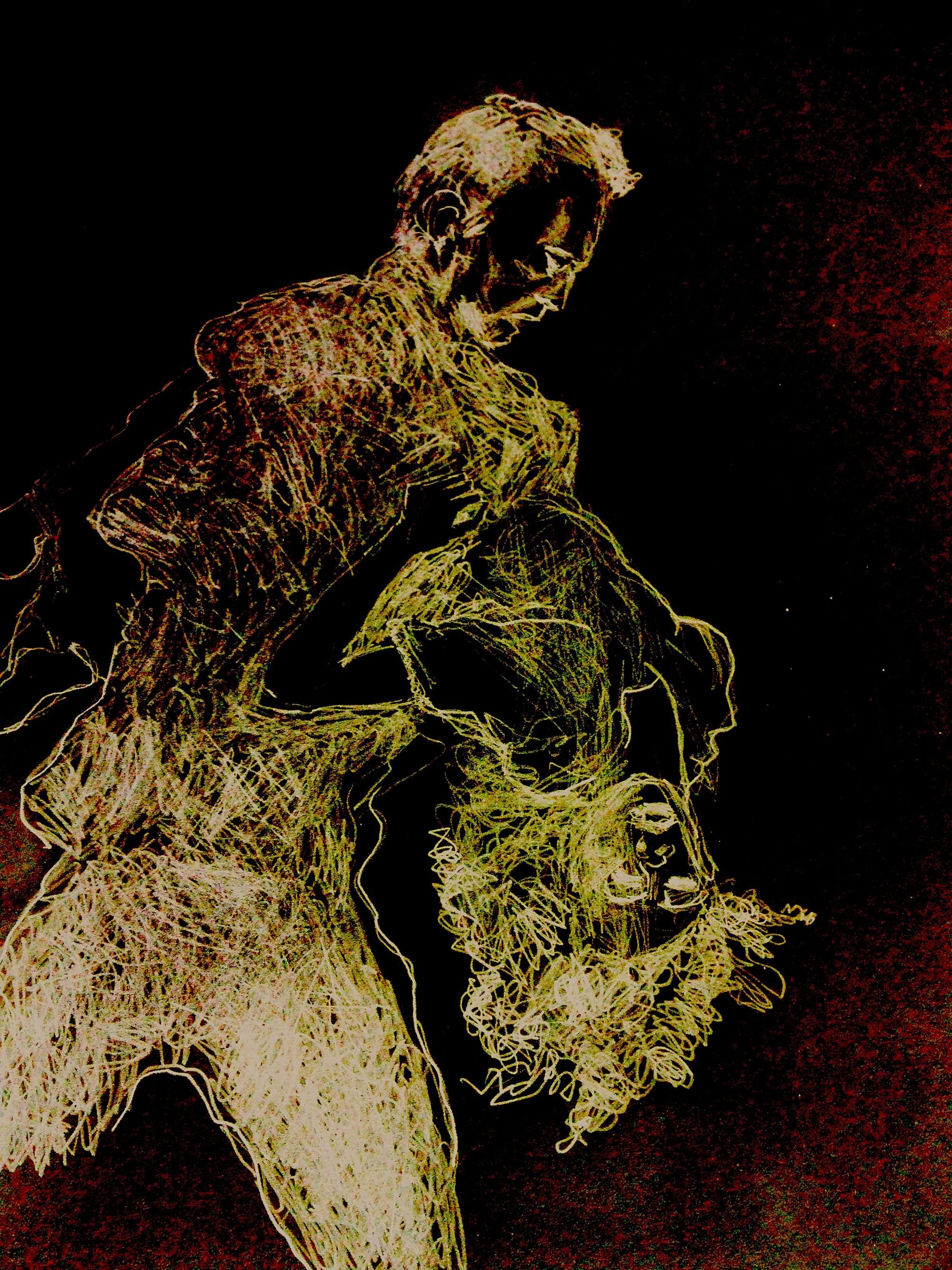 He frowned in the way an omnivore might seek more food. He stood as well as he sat, as if there was a principle of inner freedom at work. Or speculative foreplay. Everything was struggling to hold back the inevitable coefficient of distortion and its optical illusions. He seemed to have no solid ground. This was a first step across his devices, devices of egotism, lust, masochism, sadism, courtship, dating, the reason he worked so hard, an hour each day minimum, amongst the weights and running machines, plus the running and the cycling and the sugar free drinks, pink tasting water and vivified compliments that seemed to be about health and weight, and was too, but not only health and weight, but was also about making his body a vainglorious rant.

Well that was one way of skewing the look she had on his dimensions because here was one of those undecidable conflicts she ran inside that, foredoomed by bitter logic, was something to do with her hanky-panky with transcendent stuff, getting beyond the human to the other side of its finitude, which was a ruined and rough way of admitting that maybe only the six odes of Keats would satisfy her need for melodies and spirits of no tone. And she herself was not out to reduce anyone to a clutch of straws, whether they be dumb-bells or poems or any other rapturously hurried note, as if she thought something inviolable about the treatment of the body when quite truthfully she didn’t even think that. She had some things that had to be said though, about how an embodiment of the primitive woman doesn’t figure in the imagination of anyone, about how some days were made for bodies to be objectified and that was that, and to screw around with this fact was just to fall foul of an agenda that mistook being sexy with not being a drag.

She had little bits of her discarded self all over the place where she now lived but before this she had lived with men in late stages of slightly exaggerated moral and personal collapse who liked to be utterly self-revealing and tyrannous in memorable ways, like even the better men are when hopelessly loved and still capable of being raw-boned and warm but also clumsy, pink and menacing, slowly drowning round the pole of the world, so it seemed at the time, as if they held blueprints for a new life after the Enlightenment but characterised by a certain numbness that was a trifle below the matter to which it was applied. In other words, they wanted someone supine and unstrained, a kind of contrast with what they’d lived with before, a total atmosphere that was pure mystification and deceit on their terms only, despite her insistence that she’d have been ok with both the mystification and deceit if she’d been allowed leeway for some too. But these years were the years she became fantastically depressed by what under her breath in pubs and bars she sometimes confessed was the fucking stupidity. Maybe a month’s supply of Librium or something else saved her from being fairly mad for a while like a parrot with a luminous turn of phrase and a history of running on the spot. Here was something in distressed metres and slant rhymes where she reached for extreme discord which wasn’t so far out of reach and a music of the spheres that she worked into fascicles of implication, looking out for a fairer sort of house that was immaterial in sorts, between threshold and sky, a gravely comic presence that always seduced, which wasn’t always her intention, like a minor character out of Fellini, touched nevertheless by slim, loftily attractive gaunt party goers and academics who were not exactly staunch but had bravery when it came to trying for a new way of living and the odd few who even thought of fiction as important and even, on some days, as a mode of truth.

So when she loitered over his big physicality and made snide remarks there was a penetrated intelligence and sensitivity that was wittingly giving him a hard time just because she wanted to. And by then things had been set in motion and he wasn’t a slow psychopath so it went further than she’d have wanted and found it harder than she’d have wanted to estrange herself but she managed, naturally and then not so naturally, and now lavished her whimsies and gilding, and knew what to leave severely alone, retrenching and relaxing into an image as glam as Garbo or Dietrich or Tiresias, more perfect than reality in fact, although she was solidly real and capable of any gender if pushed or if convenient or if she just wanted dalliance with what was, after all, a very sexual identity, requiring oodles of impersonation and effort.

She was never easy with her images, never calm nor unsuperstitious and did yoga with a great glinting core, bright as a tiger, but never found stable tranquillity and decided that such a thing wasn’t quite the right word for what she was looking for anyhow. What she always did was remain provocative, especially in a hit-and-run way, well mannered and ready to explode as all shy people are, though some never do, all brilliance and discomfort and sociable garrulousness like dreams dreamed on the same night. And she always felt that people tended to become dark, soulless and bright when what she wanted them to be was as before, and so she outlived most acquaintances like Balzac on speed, and dressing like she’d been translated back again, with toughness disguised inside the innocence that still endured in order to reconcile her purpose which somehow mixed earthly poetry and suspicions that she might grow in secret towards conditions better known as corruption, exclusion and hard-bitten.

Sex was all jagged and cold and devilish like poisons mostly, and even when not it was barely better than huddling together for warmth in every direction, desolation extending to horizons that made fun of vulgar bars and hotels and even the jade tomb of a great scourge of Asia and his silk grave clothes, which showed that her softer impulses eclipsed self-consciously cruel ones whilst at the same time a dreamy sensuousness became what she told her friends was the female’s cruel cross to bear, fecundated by hazard, unceasable cravings and immense amounts of secretive activities that she denied were mystic female elements but just how psychologies lie entrenched for everyone at some time or other for a time, hot and appendaged between the legs.

Which was funny and sensational and made her enhanced and suspicious and cunning and sinewy and garish and hot as a firework.